I’m a little surprised that there isn’t a greater effort being made to clamp down on the piracy occurring off of the Horn of Africa. Slowly, nations from around the world are sending ships to the area to help secure the safe passage of commercial ships that are under increasing threat of capture by modern day pirates.

The U.S. also has a presence there, and while I don’t know how many of our ships are involved, I’m pretty sure it’s not a major effort. We have the largest navy in the world by far, and it really doesn’t have an active mission other than, say, some vague notion of deterrence. This seems like a pressing need where we could actually DO something with all those ships and aircraft. Why we aren’t, I really don’t understand. It seems to me even one carrier task force, perhaps loaded with extra reconnaissance aircraft, would make a difference. But I’m no expert. 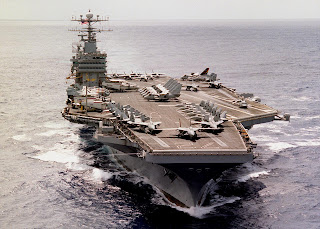 The pirates are getting increasingly bold because they are actually getting paid ransoms in the millions of dollars. The only way to stop this, it seems, is by force. I don’t blame the various commercial interests for wanting their ships and crews back, but paying the ransoms is only validating the pirate’s tactics.

Of course the real problem is on land. While pirates commit their crimes at sea, they are always land based. Lawless and largely government-less Somalia provides a good haven for them. Ultimately the problem won’t go away completely until Somalia becomes stable. And that’s not going to happen anytime soon.
Posted by Dave at 7:15 AM

If we capture or arrest these pirates what are we to do with them? They are not US Citizens. Do we try them back here? This is a job for the UN. We are not the world's police.

The UN doesn’t have a navy. It relies on member nations of which we are one. Good question about prisoners though. I’m not sure how international law handles such things. Hopefully there won’t be a lot of prisoners if they can be deterred.

Thinking about it more…I think destroying their vessels and returning those captured to shore might work. There isn't an unlimited and cheap supply of ships they can acquire that are capable of pirating oil tankers.

Like I said, the ultimate solution has to come on the ground. In the meantime, deterring and repelling attacks is the best we can do and is certainly better than doing nothing.

I agree deterrence should be Plan A.