In addition to being bought out, Anheuser-Busch has been busy cranking out a variety of new flavors of beer. Last weekend I decided to try their new Belgian White wheat ale called Shock Top. 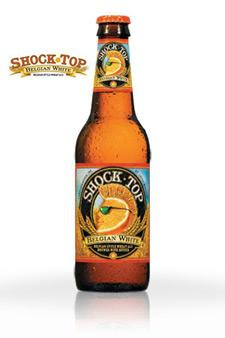 As you can see from the label it certainly gives the impression it might have an orange flavor. That made me hesitate in buying the stuff since I’m not big on fruity beers. I know a lot of places will put an orange slice on the side of a wheat beer like Blue Moon, but I usually just take it off and forget about it. Anyway, I decided to take a chance and bought a six of Shock Top. 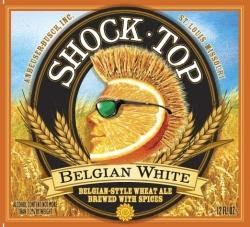 I’ve been surprised that I really haven’t been able to taste the orange in the four I’ve already consumed. Maybe a tiny, tiny hint but I wouldn’t call it a fruity tasting beer at all. Or maybe I just got a “good” batch. 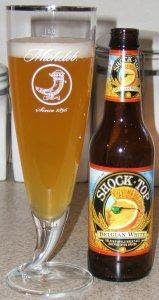 I don’t normally go reading reviews of beers. I mostly rely on my own taste and maybe the recommendations of others. But for some reason, I decided to look at the reviews of Shock Top. They were all over the map; some people hated it, others really liked it. Several people commented on the orange taste I haven’t noticed. 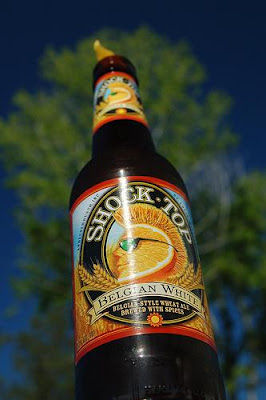 Have a great weekend! And does anyone know if that is really Aaron Schock on the Schock Top label?
Posted by Dave at 12:01 AM

Have your tried their Great American Ale? I'm curious, but not enough to pay for a six pack. I did receive a checkout-generated coupon for a dollar off when I purchased some Fat Tire Black Ale, but I'm still not biting.

No, I haven't tried any of AH's next generation other than Shock Top. I suppose I will in time.

I think a lot of people hate Shock Top for the same reasons they pooh pooh Blue Moon. They hate it because it is a big boy dipping its toe in the import and craft brewing areas. It is probably a very acceptable beer and if it can lure drinkers into trying something different then I say great. Maybe it'll lead people to try others and do their own comparisons. Schlafly's Hefeweizen and Goose Island's 312 are supposed to be pretty good too.

I have tried the American Ale and it is good. It isn't the best of that style out there but I'd drink it. I'd probably drink it in preference to Sam Adams if those wre my choices.

I'll also recommend the 1554 Black Ale by Fat Tire if you like darker ales. It was tasty and a good many restaurants were carrying it.