I think this is probably a good idea. Fred Armisen did an admirable job trying to portray Obama even getting many of his speech patterns and mannerisms down. But in the end, I kept seeing a white guy in blackface. 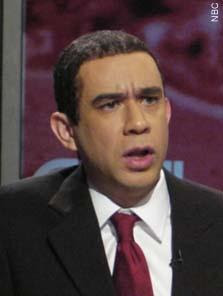 Armisen came trough in a pinch, but SNL really needs someone who can do the job "full time", as it were. I mean, Obama is going to be around for awhile and for some reason SNL has become the political satire gold standard on TV. So they need someone good if they expect all the cable news networks to replay their Obama skits endlessly.
Posted by Dave at 11:14 PM

Fred Armisen is half-Venezuelan and one-quarter Japanese making him less of a white guy than Barack Obama. The Trib article is a little ridiculous in thinking an African American is needed to play the President. Armisen plays Prince for God's sake. I think he has enough non-white guilt to play Obama. Give him time. He'll improve as we all see more of Obama beyond 'speech mode'.