My five year-old son picked out a set of little army men today when I took him to Toys R Us to pick out a reward for FINALLY relenting to allow his hair to be cut at a hair cutting place (we've been cutting it at home, with mixed results, for the last two years because of his stylist phobia).

We get the army men set home and he recruits me to help him set it up. It's a fairly good sized kit for $12.99. In it there were the army men in both green and tan (opposing sides, don't you know) and each side also has its own tank and jet fighter-bomber. And for some reason the green guys also get an attack helicopter, tipping the otherwise perfect balance of arms.

Anyway, I was struck by how the army men were the exact same guys we used to play with 40 years ago. 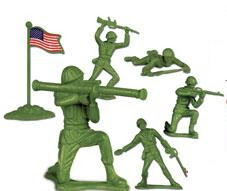 You remember them, the guy leaning back getting ready to throw the grenade, the dude with the bazooka, the nut standing up firing only a pistol (my son let me know that he had figured out that guy had a gun and wasn't just pointing), the soldier kneeling over the mortar ready to drop in a shell, etc. The exact same WWII style infantry I can become so familiar with as a kid. You'd think that they would update them to reflect current weapons and helmets and such. But I guess a classic is a classic.
Posted by Dave at 11:35 PM

I remember having the same set. It didn't turn me into a war hawk after all. For the longest time I thought the guy was leaning back because he had been shot. I always put him in front of one of the guys firing their gun.

How would you update them? I think the idea of hand to hand combat was easier to understand in ww2 than it is now. Occupation soldiers and guerrilla bombers doesn't sound like it would be as fun to play with.

My 40-something husband started collecting these a few years back -- soldiers that were just like these, but a light gray color instead of green. He repainted them to look more lifelike. A lot of adults are into collecting miniatures and creating tabletop battlefields, and using the cheap plastic soliders is one way to enjoy that hobby without spending mucho bux on professional miniature kits.

Other than the guy firing a bazooka, the army men all have M-16rifles which would place them more Vietnam era.

So as a counter to Will's point, occupation soldiers and guerilla bombers would be appropriate given that war and timeframe unless you consider the Viet Cong regular army and U.S. troops as something more than occupation troops.

They should make some crazy muslim soldiers as the enemy. They could have removable diapers to take off of some dolls butt and put it on Muhammad's head. Now that would be realistic

And maybe they can make some idiot wrong-wing soldiers with a permanently detached brain.

Purists would argue that removable garments and/or weapons are not a part of 'army men' but instead belong in the realm of action figures.

Aside from that a keffiyah is fairly dissimilar to a turban.

My army men totally killed my brother's army men after I painted his army men with various colors of nail polish.