The Name is House, Maisenbacher House

Oh who am I kidding, I can't resit the sideshow that is the Maisenbacher house. Saturday, on the way home from the Festival of Trees I treated the whole family to a visit to the House, Our House, In The Middle of the Street. We had the good camera with us so I used it instead of my iPhone for once. 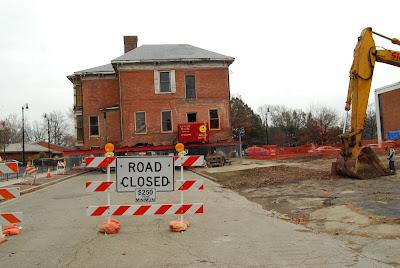 Given the controversy around here last week, I expected to find throngs of onlookers, protesters and worried engineers at the site of the house. Except of a couple of befuddled foreign tourists who briefly wondered over from Lincoln's Home, we were there alone. 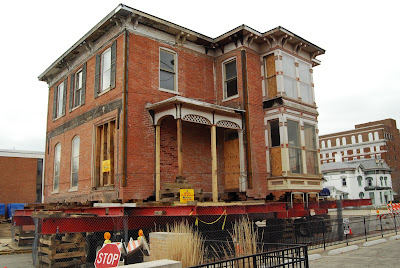 There was also a big hole in the lot on which the house is/was/will be moved. But, of course no foundation. My 5 year-old son kept wanting to throw chunks of brick into the lightly fenced-off hole. It was tempting, but I figured the police would drive by right at that moment and we'd both be hauled off. 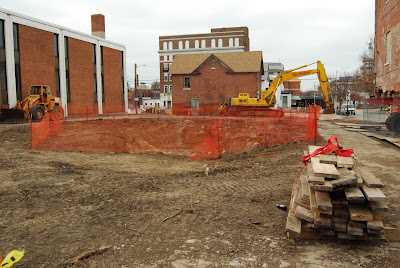 Speaking of police, there was no security at the site at all. There was a cop car (I'm not sure if it was even occupied) parked around the corner and out of sight on Sixth Street just south of Jackson but that was all. I could have climbed up and begun dismantling the thing and no one would have stopped me. 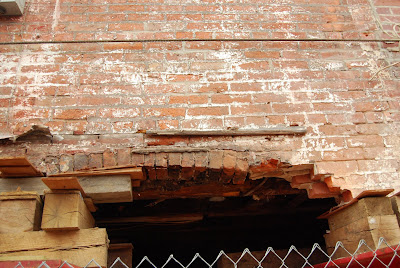 One interesting thing you can't see from pictures taken from a distance are the wires wrapped around the structure keeping it held together. 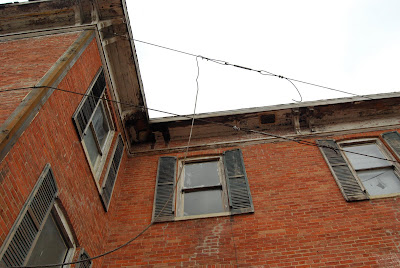 The whole thing was kind of sad and looked very much like the project gone awry that it really is. 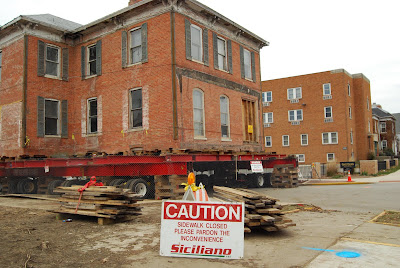 I took my kids to see the house after school on Friday. The unoccupied police car was exactly where you described it then, too. I thought the yellow signs on some of the windows that advertised "expert house movers" was funny, in a literal way.