SPRINGFIELD (AP) — The election of Barack Obama as the next U.S. president has made Springfield's Old State Capitol even more historic.

Known as an Abraham Lincoln site, the building now has an important link to a 21st-century event — the starting point of Obama's successful presidential bid.

State officials said Wednesday they will commemorate Obama's appearances at the Old State Capitol on Feb. 10, 2007 to announce his presidential candidacy and again Aug. 23 to introduce Joe Biden as his choice for vice president. However, officials say they have determined how.

Dave Blanchette of the Illinois Historic Preservation Agency said a plaque could be installed, or a more elaborate marker placed at the site.

Maybe I’m being a bit too traditional and maybe a bit too superstitious, but shouldn’t we wait until after the Obama presidency is over to start making decisions on how to mark the spot where it all began? I just think that gives us a better perspective on what is appropriate. 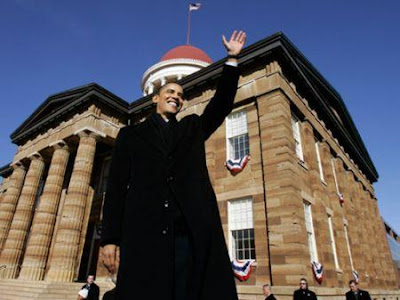 I guess putting up a plaque now would suffice, and we could always do something a little more grand later (if appropriate). After all, it can be argued Springfield should be cashing in on Obama right away given how profitable presidential tourism has been to the city. Still, I’d be more comfortable with waiting to see the full measure of the man’s greatness (or lack thereof) before we erect anything too permanent.
Posted by Dave at 7:16 AM

I'm waiting to see how much we'll charge Obama for commemorating his appearances.

My recommendation is this. We erect a large ornate plaque on the south east corner of the old state capitol plaza - something with raised relief - something the kids can run their fingers over as they walk toward the capitol.

I've seen thousands upon thousands of school children, a large percentage of them African American, lining up to go into the Old State Capitol. I can think of no better place to post such a plaque.

We also need to get a statue in progress. We then invite Barack back to town as a guest to attend the ceremony and invite school children from all across the state to attend.

I don't believe for a moment that Barack Obama doesn't deserve a statue right now.

And despite how George W. Bush and company have helped to ruin the economy I do believe that Barack will be a careful steward over an economic resurrection, and more.