When the Movie Is Made, Can I Play Todd?

I could pretend to not know why this woman is STILL on my teevee and newspapers and internets, but that would be dishonest. Sarah Palin has a certain celebrity factor that no media outlet looking for viewers or readers wants to do without. She’s a person who came out of nowhere (Alaska counts as nowhere, right?) to suddenly be the nominee for Vice President of the United States. It had Julia Roberts movie written all over it. And just because the election is over and her team lost, is no reason to let go of that fascination with her. 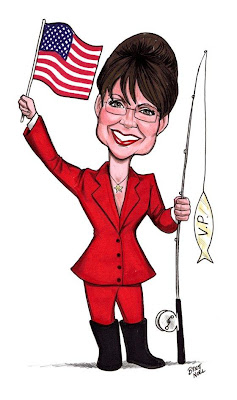 Sadly, part of that interest, for lot of people, comes from a sort of rubbernecking-the-train-wreck urge where you can’t believe this woman actually came this close to being this close to being president and that she doesn’t get how silly that is. Watching her pontificate is just fascinating because you never know what she might say. And for Palin’s part, she can’t get enough of the attention. Pretty soon we’ll all have her convinced she really does matter. At that point, everyone laughs I unison and she fades from the scene.
Posted by Dave at 11:57 AM

Anonymous: I forgot something, LOSER.

As in She's wasting everyone's time if she thinks she has a chance in hell of winning the nomination in 2012.