Give that man a beer! He's earned it.

People have donated enormous amounts of time this election season to help push their candidates over the finish line. For Sam Chapple Sokol, it came down to what he could personally offer.

Sokol, a 23-year-old paralegal at the Department of Justice, is celebrating election night with friends, fellow Obama supporters, and a batch of 51 homemade Audacity of Hops beers. The brew not only honors Barack Obama in name—a play on the presidential candidate’s book The Audacity of Hope—but in its ingredients.

Sokol, also the beer writer for the Humble Gourmand, used corn sugar from Kansas and Illinois and hops produced by Challenger and Progress, and he commissioned his father—a chemist and a coffee aficionado—to blend and roast coffee beans from Kenya, Indonesia, and Hawaii. After mixing together several malts, Sokol topped off his creation with filtered DC tap water, in honor of the nominee’s potential home. But the symbolism doesn’t stop there.

The 51st bottle is the larger 22-ounce size—“to give DC residents more of a voice.” 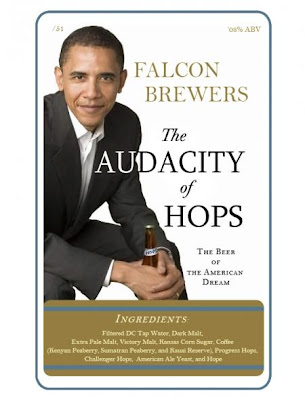 Have a great weekend! And everyone shout, "Four More Beers!"
Posted by Dave at 12:01 AM

Good timing with this post Dave since Saturday is Teach a Friend to Homebrew day.

I did just pick up a bomber of Avery's Ale to the chief which is a Double India Pale ale that I plan to have on inauguration day to celebrate our new occupant.

Tuck has them in stock on the bottom row of the bombers endcap. Pick one of if you love hops.