One of the bands that I thought, in general, didn't do psychedelic all that well in psychedelic's heyday was The Rolling Stones. This even though the psychedelic era in music briefly coincided with the Stones own heyday. But for some reason they did produce one of my favorite psychedelic songs of all time: 2000 Light Years From Home. Here's how it sounded recorded. And here's a live version. 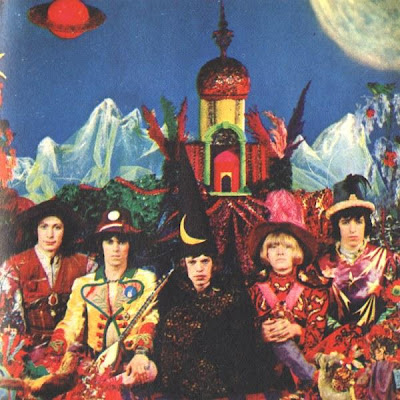 Years ago, reading books recounting Vietnam War experiences and trying to understand what had happened to the generation immediately preceding mine, I was intrigued by how this song came across to the boys fighting over there. Not surprised, just intrigued. Later, as a college student in the very early '80s, it became a personal anthem reflecting my own journey from the south-central part of Springfield to the rest of the universe.
Posted by Dave at 11:29 PM

"She's a Rainbow" is another good psychedelic Stones song. But I agree, they didn't do trippy as well as some others.

The answers to so many questions about love and life can be found in songs by the Rolling Stones. Great song.