The Beatings Will Stop When You Agree With Me

I guess I just don’t get conservative “humor”. Granted, all I’ve seen is the TV commercial for An American Carol, but how is having a fake Michael Moore character slapped, punched, beaten, verbally abuse, and thrown out of windows funny? I thought after watching it that ad maybe it was just my own political bias, so I substituted the fake Moore with a fake Rush Limbaugh…and it still wasn’t funny. 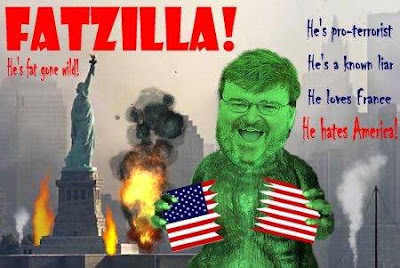 I guess the adoration of violence in the conservative mind extends to their funny bones as well. At least when the violence is directed against those who don’t agree with them politically. I can’t wait for the sequel when they flog, waterboard, and decapitate Algore! Ha, that’ll be so funny and really demonstrate how right they are about things.

Update: Imaging smacking the tar out of your perceived wrong-thinking political foes might be cathartic, and therefore somewhat enjoyable, but that’s different from being funny.
Posted by Dave at 11:54 AM