Regarding my earlier post about the canceled AIG employee bus trip to Chicago, I have learned a few more things.

AIG may, in fact, be saving a few dollars by not renting the bus. Apparently they are only out the cost of the deposit not the entire cost of the bus. I’m not sure how much it costs to rent the bus or how much the deposit was but I’m assuming there was at least some savings for the company. Keep in mind too that there was a $15 per rider charge to get on the bus (which is being refunded) that also would have help offset the overall cost, so I’m not seeing where AIG is really saving all that much money.

Having said that, the money was coming from an already funded employee activity fund. No word on if AIG is planning on taking that activity money back and apply it to their debt to the Treasury but I doubt it. My guess is that they will use it for some other less visible employee activity. 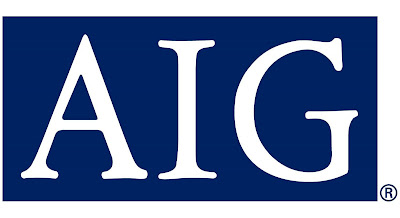 Oh, and one other thing. I found out that at least one AIG employee has been harassed here in Springfield because of the perceived sins of the larger company management. I’m told that a local employee wearing an AIG badge was verbally abused at a local box store for the whole AIG mess. People, get a grip. Do not take your frustrations out on low level workers shopping at a retail store. That employee has nothing to do with AIG corporate decisions and that employee may wind up being a victim of the situation if the Springfield office is sold (they are up for sale), or the office is disbanded or layoffs come or whatever.
Posted by Dave at 12:31 PM

What, Dave? You mean it's not okay for me to haul off and punch an AIG entry-level staffer in the mouth for the foul-ups of the company's executives? Damn.

Seriously though, I can't believe someone would accost an employee for that. It's just silly.

Congrats Dave for some investigative journalism. You made the SJR...!!!!

I always loved talking with AIG. So entirely on top of the world, and happy as hell to plunder our client base with their risky but seemingly more profitable products.

Products which they could offer due to their advantages gained through their sheer mass AND business practices which have now come back to destroy them.

They dined off of us, harming our small but conservative and responsible company - the great AIG shark, and now we dine off of them. That's the way it works in business.

Unlike a government office AIG's local facility will be sold off to the highest bidder, and will certainly be a useful facility for another company in the future.

Those wearing AIG pins, giggle, will be working somewhere else, wearing other company pins.

Before I get myself into real trouble here - we're not talking about your spouse?

Is that your source?

If so, I feel very sorry for her personally, and am certain with all of the experience and skill she has, that she'll find another job with no problem.

I was only speaking of the company.

No, Mrs. TEH does not work for AIG.