I’m a strong supporter of the statewide smoking ban. I’ve made my case on the subject many times here. So I should be outraged that some places, almost all drinking establishments, are violating the law, right? Well no, I’m not. That is, I don’t think it’s any big deal in its current form.
First, my main goal in supporting the smoking ban was to get cigarettes out of restaurants. Initially, I thought getting smoke out of bars was a bridge too far and a compromise I was willing to make to achieve my primary concern. In the end, smoking was banned from virtually all workplaces including bars. All the better. But the fact that there are a few rogue establishments that look the other way I don’t think is hurting much. 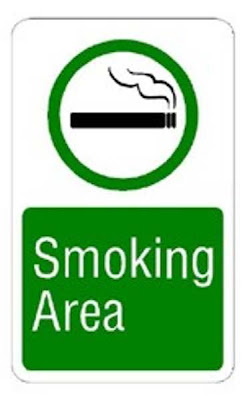 In time, I think places like that may indeed become the last refuge for the public smoking hardcore dead-enders, but smoke-free will still be the norm as most proprietors are good citizens willing to work within the law, even if the politicians and law enforcement cant figure out exactly how far to go in enforcing the law. If violations ever did become widespread, which I doubt will happen, I think enforcement measure would be stepped up. Right now there’s just no need for it.

The way I see it, we have about a 99% net gain in favor of the smoke-free environment. That’s huge and I’m certainly able to live with that.
Posted by Dave at 12:15 PM