OK, If You Won't Go Out With Me, How About Your Ugly Friend?

Our Senators are trying to set us up with an ugly plane.

U.S. Senators Dick Durbin and Barack Obama have asked the U.S. Air Force to station RC-12 aircraft in Springfield as part of a new flying mission for the 183rd Tactical Fighter Wing.

The Springfield base lost its last F-16 Sept. 23. Assigning the RC-12 to Springfield would allow the base to continue in a flying mission. The Air Force is planning to acquire a number of RC-12 aircraft to support intelligence, surveillance and reconnaissance efforts, but it has not specified where the aircraft would be based.

The RC-12 is a twin-engine, turboprop passenger and cargo aircraft that can also be used for medical evacuations. The aircraft also has a camera, which could send live video to military commanders. 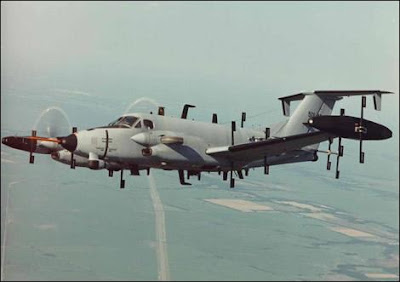 Geez, what a bow-wow. Might want to see a dermatologist about that.

Look, we just went through a rough breakup. Let's not hook up with any ol' rebound plane. Every time we see an RC-12 fly over we are still going to think of our prettier and cooler ex and that's not fair to anybody.
Posted by Dave at 10:51 PM