Life on Mars: A Review

The only new show I’m giving a chance (so far) this season is Life on Mars. It involves an element of time travel so, of course, I couldn’t resist. I’m a huge fan and even bigger critic of TV and movies that delve into time travel (but I don’t read a lot of fiction and haven’t in decades).

Basically, the show revolves around a modern New York detective who gets hit by a car and wakes up in 1973 to find himself still a cop at the same precinct, just 35 years earlier. It’s based on a British show by the same name. I’ve not ever seen the British version so I won’t compare the two and am simply judging the American version on its own merits.

The most annoying thing I find in time travel fiction that involves going back in time is the over-emphasis on how much things have changed and how stuff we now take for granted isn’t understood by the rubes who live in the past. Life on Mars certainly delivers some of this, unfortunately. In the very first back in time sequence, our hero tells a cop that the vehicle he has illegally parked can’t be his because he owns a Jeep. The cop then asks him, “You drive a military vehicle?” Please, there were commercial Jeeps on the market in 1973. No one would have ever said that back then.

Another example comes when our hero goes into the cop shop and demands to know where his desk and computer are. One of the detectives in the station mocks his computer reference by saying something like, “Computer? Like HAL in 2001: A Space Odyssey?” C’mon! Workers (probably not detectives though) had mainframe monitors on their desks by 1973. I got my first hand-held calculator in 1974. Home PCs were being sold by Radio Shack by 1977. Computers were not things of science fiction in 1973.

Oh, and then there are the Twin Towers. In the very first scene where our hero is back in 1973, before he even realizes what year it is, he looks up and, OMG!, sees the World Trade Center towers. That would be a shock and is kind of effective in that first scene. But then in the last scene of the show, again OMG!, the Twin Towers again. OK, enough. We get it. Are we going to see this every week? 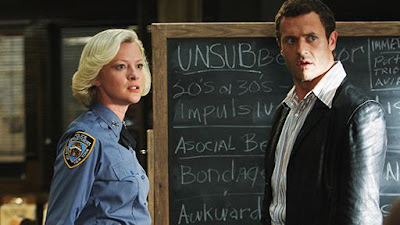 The other thing that apparently can’t be resisted is period TV. On several occasions the TV is on in the background (or foreground) and we see TV shows and commercials from 1973. Imagine! Along those same lines, there is a soundtrack of music that one might have heard in 1973. It’s a good soundtrack, but it’s overlaid onto the show and not just incidental background music. That comes off kind of gimmicky. But, again, it’s a good soundtrack so I give it a pass.

Also, once we are back in 1973, there is this kind of weird hue in the air that gives everything a surreal look to it. I’m not sure why this is. The air (well, except for more pollution), colors sunlight, etc. all looked the same back then as they do now. All I can figure is that the makers of the show wanted to somehow convey the feeling of strangeness that our hero must be experiencing. I’m not sure how the hue helps this. I mean, the show does a pretty good job of getting the fashion, the vehicles, the technology, etc. of the time correct. That would be strange enough for anyone.

The actual story is kind of compelling. We aren’t sure if this guy is really back in time or is in a coma dreaming the whole thing. Given that he hears voices coming from his radio and TV addressing him as if he were laying unconscious in a hospital, certainly makes us think it is all a dream, but who knows. Meanwhile, he spends his working hours helping solve a crime that is almost identical to the one he was working on in 2008.

Perhaps the most interesting part of the story is how our hero tries to introduce things like forensics and psychological profiling into an environment that is clearly using only shoe leather and brute force to catch the bad guy. I think they overplay the degree to which the one female cop on the show is oppressed, dismissed and harassed. This was 1973 not 1914. Still, point well taken that women were just beginning to assert themselves as equals in the workplace.

All in all, I was entertained. I must admit that even finding the faults is entertaining to me. So, I will go back for at least another episode and probably more.

I also really liked the show. I worked on some marketing for it so I was tuning in regardless, but I thought it was great! Loved the music and got a kick out of the jokes based on how things have changed in the last 35 years. Makes you wonder what will be so outdated 35 years from now... iPods, Google, gasoline??

The BBC show was one of my favorite programs of the past 20 years, so I tuned in to this just to see what it was like. It was a lot better than I expected, but it's basically a shot by shot recreation of the original, which didn't work for me because a) I think the original is better, and b) because if you have the chance to improve on something, why do the exact same thing?

I thought the twin towers were overwhelming and a nice kick in the sack for Sam, but then I kind of wondered why he kept acting like this was a big practical joke. If I was in New York and saw the Twin Towers, I'd be more concerned about that than some afros and metal desks.

Don't understand why you are complaining about the Twin towers shots.

It's based in New York in the early 70's. It's just being historically accurate.