I find it kind of weird how every political skit put on by Saturday Night Live is now headline news the next day. SNL has been doing politics since the show inception more than 30 years ago. Like the rest of their material, sometimes it works and sometimes it doesn’t. But in recent years, the mainstream media seems to hang on every sketch and that situation has been particularly noticeable this campaign season. Whole SNL sketches are rebroadcast on newscasts now.

I suppose the increased use of SNL material has a lot to do with the need to fill time, particularly on the cable news outlets. The availability of the skits online helps propel their popularity in general which then feeds back to more media coverage. Still, I’m getting a little annoyed at the “Hey, did you see the latest SNL skit taking jabs at the candidates?” lead-in to news stories on TV.

It's gotten so popular, NBC has been running SNL political specials on thurday nights in the weeks leading up to the election. They never used to do that (maybe they did in 2004?). Rather, in the normal SNL time slot thye would run a "best of" show featuring SNL political skits from the past. 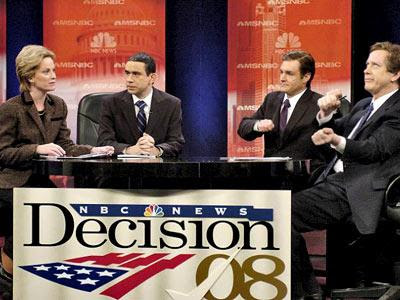 Having said all that, I suspect the Joe Biden/Jack Murtha take-down that opened Saturday’s show isn’t going to get much play because it was too “insider” for most people get. Unless you live in Western Pennsylvania or are a political junkie, the material was just too obscure. But we’ll see.

Fow what it's worth, my all time favorite SNL skit from a presidential year came in 1980 when the three candidates, Reagan, Carter and Anderson (I forget who played who in the skit), all showed up in the same men’s room and began a spontaneous political debate using urinals as podiums. Oh, and Walter Cronkite gave no air time to the skit that following week.
Posted by Dave at 7:19 AM

My favorite political skit was during the 1992 election where Jerry Brown (Carvey), Paul Tsongas (Franken) and Bill Clinton (Hartman) all spoke at a Star Trek convention.

I liked when they did a spoof on Ross Perot's running mate.