Brownsox over at Daily Kos ponders what I have been pondering, only more seriously:

...chances are that in ten days, Illinois Governor Rod Blagojevich will have a big decision to make about who he sends to Washington.

The trouble with this speculation, of course, is that the decision ultimately comes down to the whims of one exceptionally unpredictable politician. Virtually no one, including Blagojevich, has completely ruled out the possibility that the governor might pick himself to fill the seat - a move so controversial that it is almost never attempted.

Still, there's no harm in speculation, so without further ado...

You can almost certainly rule out Democratic Rep. Rahm Emanuel, one of a troika of superpowered Illinois Democrats in Washington (along with Obama, and Senate Majority Whip Dick Durbin). At 48, Emanuel is already the fourth-ranking Democrat in the House. Ahead if him are current Speaker Nancy Pelosi, who is 68 years old, Majority Leader Steny Hoyer, who is 69, and Majority Whip James Clyburn, who is 68.

The math would seem to suggest, then, that Emanuel may well become Speaker of the House some day - a historic ascension which would make him the highest-ranking Jewish officeholder in American history. It's doubtful he would give up an excellent shot at the Speakership to move to the back of the line as a freshman United States Senator (although Emanuel will be only 49 next year and would have plenty of time to climb the ladder in the Senate; Robert Menendez gave up the same position Emanuel holds, that of caucus chair, to accept a Senate nomination).

The same would not be true of State Senate President Emil Jones, a Blagojevich ally, would be selected to fill the seat. At 73, Jones holds a position of exceptional prominence in Illinois politics, which he would be sacrificing to become 100th in seniority in Washington. Blagojevich may also be reluctant to send one of his few friends in Springfield out of the state.

Selecting Illinois Attorney General Lisa Madigan would solve one of Blagojevich's biggest problems; it would remove a potential rival for his reelection to the governorship, a position which Madigan reportedly covets. On the other hand, Blagojevich is a long-time political enemy of Madigan's father, Illinois House Speaker Mike Madigan, and as such, he probably has little desire to do any kind of favors for the Madigan family.

Blagojevich will be under some pressure to appoint a minority, and there are a number of possibilites there. At 67, Rep. Danny Davis is probably too old for an appointment as a freshman Senator, but it's well known that Rep. Jesse Jackson Jr. would welcome the appointment. Another possibility there is Rep. Luis Gutierrez, who would be the first Hispanic Senator elected from Illinois.

The hot rumors revolve around Illinois Veterans' Affairs director Tammy Duckworth, who would, I believe, be the first Asian-American woman in the United States Senate. Although she has never held elected office (she narrowly lost a race for Congress to Rep. Peter Roskam in 2006), she is apparently very well-liked by Obama, Durbin, Emanuel and Blagojevich, and a good relationship with those four power brokers goes a long way.

Outside of minority picks, Rep. Jan Schakowsky of Evanston has been very clear that she'd like the appointment. She's certainly a solid liberal, but she's had some bad press over the last few years (her husband pled guilty in 2006 to a check-kiting scheme and served five months in prison, though Schakowsky herself was not accused of any wrongdoing).

State Comptroller Dan Hynes, who sought the seat in 2004 and lost to Obama in the primary, would also be a solid pick, as would Lieutenant Governor Pat Quinn. Hynes and Blago apparently have a frosty relationship (a lot of people have such a relationship with Blagojevich), but Hynes could be appointed to the Senate to forestall a potential primary challenge for the Governorship in 2010. The same is true of 32-year-old State Treasurer Alexi Giannoulias, who, like Hynes, Madigan and Quinn, is rumored to seek the Governor's office.

Then there's always the possibility that Blagojevich might appoint himself. He's just...er, unconventional enough to actually do it, and since most of the other powerful Democrats in Springfield currently seek the Governorship, he might be in better position to survive a 2010 primary (which would be more likely to come from a U.S. Rep, like Schakowsky, Davis, Jackson or Gutierrez.

Overall, there's really no telling what Blagojevich will do if he gets the opportunity. Rumors are currently swirling around Duckworth, but rumors are awfully fickle. 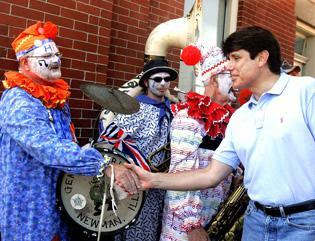 What no Tim Davlin? After Obama snubbed him for the VP slot, isn't he due?

But seriously, it looks like a (literally) lose-lose situation for Blago. If he appoints himself, he loses the Senate race in 2010. If he appoints someone else, he loses the gubernatorial election in 2010. Illinoisians just aren't going to re-elect this guy to anything. I guess the only question would be, what pumps up his pension more: two more years as Guv or a short two year stint as U.S Senator?
Posted by Dave at 12:42 PM

I bet a Headwest Sanmich that Ms. Duckworth will be the replacement. Then again, what about the chances of Michelle Obama...that would be so cool.

I think Emil Jones is more of a possibility than the Kos writer admits.

Remember, Jones is retiring from the Illinois Senate; he'll be gone from Springfield in January anyway no matter what happens.

Rod could appoint him to the Senate seat, on the assumption that Emil will just keep it warm until the next election, and give the Dems time to find a suitable candidate.

He could offer the seat to Lisa Madigan, Hynes or Giannoulias but I doubt any of them would take it; they are itching to get him out of the Governor's office.

As for Rod appointing himself: I have been told that the governor of Minnesota, in 1976, appointed himself to the Senate seat given up by Fritz Mondale when he became Carter's veep, so there is precedent for such an action.

If Rod does appoint himself and is deluded enough to try to get elected to the seat in two years, he would be practically handing it back to the GOP. He could insist on running again even if he's under indictment or on trial, just as Sen. Ted Stevens is doing now.

He could appoint Carol Moseley Braun to return to the seat she lost to Peter Fitzgerald. I bet she's already thinking of it and, quite possibly, has let Blagojevich know she'd take it.

Marie, I've been thinking about Braun too. One advantage with her is that she already has some seniority in the Senate, which can be a big advantage. She knows her way around and will get better committee assignments.