Ezra Klein is shocked that some (young) people don’t know what Pong is. Pong as in the electronic game. Klein himself is too young to have even been born when Pong first came out but he seems aware of it. Not sure why really. Maybe he read about it in an electronic games history book.

Pong came out in the mid-1970s as the first home video game (did we call it a “video game” back then, I don’t remember). I never owned Pong but I did buy the Radio Shack knock-off in late 1977 or early 1978. I wound up taking it to college my freshman year in the fall of 1978. That made me, and I wear this with a certain pride, one of the first college kids ever to sit around in his dorm playing video games. 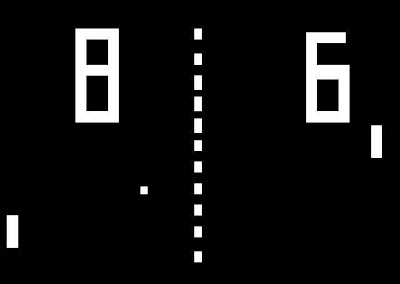 In retrospect, Pong and its look-alikes were incredibly dull games. Two paddles and a ball. Wow. I’m pretty sure my Radio Shack version was only in black and white as well. Of course, I only played it on black and white TVs so I can’t be sure.
Posted by Dave at 7:22 AM

I probably played the same version you did on my Tandy Trash-80.
One of my favorite computer games was all text with an involved storyline. It described what was happening and you had to give your character commands by typing in certain phrases. It's hard to imagine anyone would buy that with the graphics around today but I loved it.