Our Troops Fought and Died For My Right To Blog, So I Shouldn't

This story is full of interesting things.

Republican vice presidential candidate Sarah Palin mistook some of her own fans for hecklers Monday at a rally that drew thousands.

A massive crowd of at least 20,000 spread across the parking lot of Richmond International Raceway, and scores of people on the outer periphery more than 100 yards from the stage could not hear.

"Louder! Louder!" they began chanting, and the cry spread across the crowd to Palin's left. Some pointed skyward, urging that the volume be increased.

Carlin: What? The Louder family is here? They follow me everywhere and just shout out their name.

The not so funny part:

Palin stopped her remarks briefly and looked toward the commotion.

"I hope those protesters have the courage and honor to give veterans thanks for their right to protest," she said.

Some in the crowd tried to shout toward her what was really being said, but she couldn't hear them.

[Slapping my forehead]. OK, everyone is entitled to a mistake (or a thousand) but mistaking the Louder family for protesters isn’t my main bitch with this. Rather, it’s the invoking the troops as a shield against protest, real or not. You hear this all the time from our friends on the right. “Our brave soldiers throughout the ages fought and died for your right to protest and you go and actually use that right! How Disrespectful!” 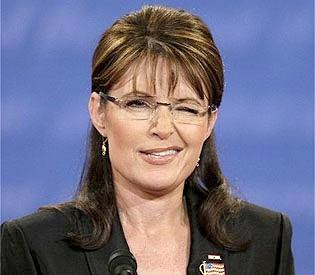 I think it would be more dishonorable NOT to voice your opinion in light of those same sacrifices. It’s like buying a flashlight and then yelling at your spouse when they use it during a power outage, “I paid good money for that flashlight and you’re wearing it out by using it!” That’s a bad analogy but a) it’s all I could think of at the moment, b) all blog posts making a point need an analogy and c) our troops fought and died so that I could make that analogy.

Oh and then there is this from the same story:

On a sunny day in which many had stood in place for more than three hours without shade, at least 25 people collapsed from heat-related illnesses and three were hospitalized, according to the Henrico County fire department.

Remember when the right was practically calling Barack Obama a mass murderer for “allowing” people to pass out from the heat at a rally here in Springfield a couple of months ago? I wonder if they will hold Palin to the same standard. No, I don’t really wonder.
Posted by Dave at 7:23 AM

The Right was practically calling Obama a mass murderer? Really? Where did you see that?

Just a couple things (and btw Dave, I want to let you know that I was not implying you were out of touch in one of my posts...don't want to wake up to an empty and broken Guiness bottle wrapped in the Illinois Times in my mailbox) I've noticed and wondered about:

1) It seems the people who talk the most about Patriotism and "supporting our troops" seem to be people who've never served a day of their lives in the military. I'm a little more receptive to people calling me unpatriotic if they have been in the military...and not some Rambo wannabe who never has served because he/she had "bad knees," was "too fat," or just had better things to do at the time.

2) Sarah Palin likes to talk a lot about Patriotism and how she wonders if us pinkos have thanked the troops for our right to protest. Me wonders if the great governor has thanked our troops for giving her husband the right to be a card-carrying member of a known Alaskan secessionist group in which the founder, one Mr. Vogler, stated on more than one occasion how much he hated America. Me thinks Mrs. Palin is feeling a litte bit of guilt, perhpas that is why she is all of a sudden a "patriot."

4) I do make it a point to thank every veteran I meet for their sacrifices. But in order to be in Palin's good graces, do I have to thank every veteran and soldier for my right to protest before I do so, or can I give an all-encompassing blanket "thank you?" If it is the former, does my thank you have to include deceased veterans, and if so, how far back do I have to go? Do I include police action, colonial wars, the Indian wars, or what?

Technically you only have to thank Revolutionary War and the War of 1812 vets for your right to protest. If you live in the American Southwest to California then you might want to thank Mexican War veterans for that right. Other than that we haven't really faced any serious threat to our existence from anywhere in the world. However it is a point that our soldiers have been used to take away the right of protest (think 60s era as a good example) and it is their use by our own government whom we should fear the most.