The ad war is under way right here in the 18th Congressional district.

I haven’t seen this Colleen Callahan ad on TV (it can be seen here) reprising the famous Daisy ad from the 1964 presidential election, but I understand it has been aired. I guess I’m a little taken aback by it. That’s, I don’t think it really works. Callahan is right to call out Schock on his totally idiotic and dangerous call for the selling of nuclear weapons to Taiwan, but I’m not sure this is the way to do it. Frankly, it comes off a little hysterical. (see the original 1964 Daisy ad here). 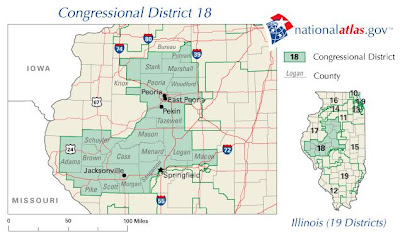 Meanwhile, I did see a Schock ad this weekend (sorry, I can’t find a link) in which Schock proclaims his love for, and promises to be protective of,…the Illinois River. He comes across as a real River Hugger. Living in the far western part of Springfield, the rump end of the congressional district, I guess I don’t give the Illinois River much consideration day-to-day. So, for me, it was sort of odd to see that ad. But it does make sense as an issue in that many communities in the district (including Peoria) are right on the river.

So, while I’m vehemently opposed to Mr. Schock, I have to give him credit for the better TV ad this week.
Posted by Dave at 7:23 AM