It Seems the Law Agrees With Me

Not to gratuitously revisit the contentious issue I blogged about a couple of days ago (I think I set a TEH record for number of comments), but there is this:

BOSTON -- A criminal investigation has been launched into the death of an 8-year-old Connecticut boy who accidentally shot himself in the head while firing an Uzi at a Massachusetts gun club during the weekend.

Christopher Bizilj, of Ashford, Conn., lost control of the weapon on Sunday while firing it at the Machine Gun Shoot and Firearms Expo at the Westfield Sportsman's Club.

A criminal investigation involving state and local police is being conducted, according to Hampden County District Attorney William Bennett. Officials are focusing on whether the statute that governs firearms in Massachusetts was violated.

"At this point, I have found no lawful authority which allows an 8-year-old to possess or fire a machine gun," Bennett said in a statement.

Bennett also questioned whether it was a "reckless or wanton act" to allow the boy to use a fully loaded automatic weapon. 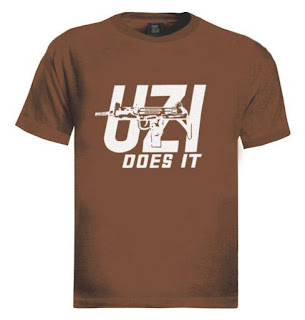 And I restrained myself from using the word “nut” anywhere in this post.
Posted by Dave at 5:40 PM

If it was against the law then the father or event organizers (whomever they are going to charge) deserve to face the consequences.

And I am willing to make inflammatory comments all the time if you think it will help your comment traffic. You might start with a post about how great mass market beer is. If you thought I was vehement about guns, wait until you see me on that swill shoved on Americans.