Not my definition of a debate:

–The questions will be culled from a group of 100 to 150 uncommitted likely voters in the audience and another one-third to come via the Internet. Brokaw selects which questions to ask from written queries submitted prior to the debate.

–The Gallup Organization makes sure the questioners reflect the demographic makeup of the nation.

–An audience member isn’t allowed to switch questions and will not be allowed a follow-up either. His or her microphone will be turned off after the question is read and a camera shot will only be shown of the person asking — not reacting.

–The moderator may not ask followups or make comments.

–McCain and Obama will be provided with director’s chairs, but they’re also allowed to stand. They can’t roam past their “designated area” marked on the stage and are not supposed to ask each other direct questions. 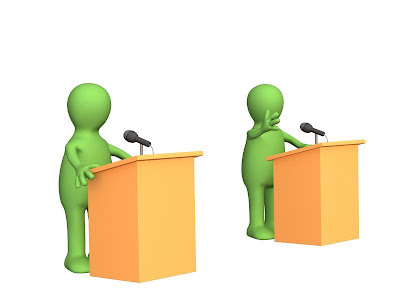 Really, these so-called debates are of little interest to me. Mainly because they contain little substance, and what substance they do have, I probably already know. No one on the stage is going to go off-message or even off-script. What’s left of interest are zingers, gaffes, and style. All of which are fun but I can catch those in the highlights after the debate or right here on the internet.
Posted by Dave at 12:16 PM

I pick the green one to win.

The green one. Yep.

I picked the three fingered one!

Gosh, there's a great deal of useful material above!