I like this early voting idea I just wish there were more places to vote early. Especially more convenient places. If I had to pick the most inconvenient place to do anything in town it would be the county courthouse which is, of course, the only place where early voting is taking place in the city. First you have to go downtown, then find a place to park near the courthouse, then you have to go through courthouse security and then make your way up to the County Clerk’s office. I understand it convenient for the County Clerk but it isn’t for anyone else.

I know, I know, more places would be more expensive and there are poor vice presidential candidates in need of clothes to consider, etc. But let’s just imagine we had a few more dollars for say, three additional early voting sites. I would think sites on the north, east, and southwest sides would be good. Places with plenty of parking would help. 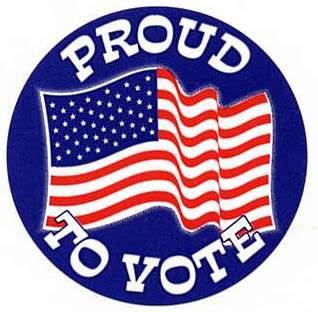 Even one place other than the courthouse would be nice. Say White Oaks Mall. They have plenty of unused space and loads of parking. The mall would probably donate the space just to get the traffic into the mall.

Anyway, the idea is good and if it were more convenient I might even vote early.
Posted by Dave at 5:02 PM

I voted nearly a week and a half ago.

But John McCain hasn't had a chance to fully explain to you why Obama is a socialist/terrorist/other bad stuff yet. Don’t be so hasty.