And speaking of being careful about what you post, the champion of free speech himself, Dick Cheney, doesn’t want his bidness showing up on YouTube:

DENVER, Feb. 11 (UPI) -- U.S. Vice President Dick Cheney is trying to block the release of video depositions by White House aides in a suit against the Secret Service, a report said.

The Denver Post reported Sunday that in a motion filed Saturday, Cheney's office argued the videotapes could be used to embarrass and invade the privacy of two aides called to testify in a civil lawsuit by a man who was arrested after he allegedly touched Cheney at a Colorado shopping
mall in 2006. 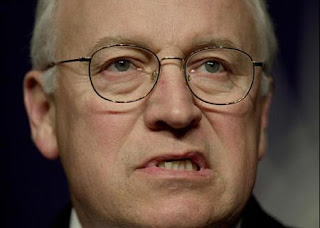 …
Cheney's motion expressed particular concern that video of the deposition could be posted on the Internet video-sharing site YouTube.com.

"As courts have recognized, using digital technology, a video recording can easily be 'cut and spliced' so as to embarrass and even humiliate a witness," Cheney's lawyers wrote in a U.S. District Court filing.

Well, then I think there should be no video coverage of anything related to the Cheney administration. Cuz, you know, some crazed digital video editor might cut it all up and rearrange the facts for their own benefit. Distorting evidence (cough, run-up to Iraq, cough) would be a terrible thing.
Posted by Dave at 7:21 AM

Cheney is wrong on this issue. I think the more open of a government we have the better we will be. And it just might keep them honest. However, Cheney is not the first, nor will he be the last member of the executive branch to fight for secrecy. There are literally thousands of documents that Bill and Hillary still have not released to the public regarding Whitewater, Hillary Care, Travel Gate, and many other scandals. Bush and Cheney also have not released the secret energy meeting documents either. I think there is enough blame to go around for everyone. Hopefully Obama might have less to hide and provide for a more transparent white house.

Rick, what's there to release about whitewater? We spent millions to find out why the Clinton's lost thousands of dollars. Speaking of Million's, where are the million's of whitehouse e-mails that were "lost" that were required to keep by law. It's a shame "how History" won't be able to see Bush's greatness during the lead-up to the law based on lies.

Here is something I found from ABC news:

It's unlikely that Arkansas papers on Hillary Rodham Clinton's years as the state's first lady will be released before the 2008 election, says the director of the Little Rock library that holds Bill Clinton's gubernatorial files

Rick,
And the first thing that Baby Bush did as President to to suppress the release of his father's presidential papers for more years. And your point is .....

My point stays the same as in my first posting. All members of the executive branch have withheld documents from the public. If you read my post again, I stated that Cheney was wrong on this issue. However, I also claimed that Bill and Hillary did the same. I am sure Carter and Reagan did as well. I did not single out Hillary as the only one ever to do this. I just stated that she, like Cheney, withheld information. I was just trying to be fair and balanced. :))

All members of the executive branch have withheld documents from the public.

When was Hillary a member of the executive branch? And Cheney thinks he is his own branch.

Hillary seems to think she was a member of the executive branch.