Look, we paid big money (via tax dollars) to destroy this satellite. Couldn’t’ they have done this over the mainland United States so we could have seen it? You know, get some entertainment out of this expense. 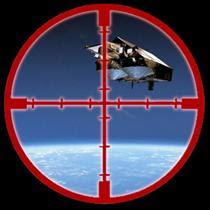 Maybe they could have added a little extra explosive to make it really spectacular. Doing it during a lunar eclipse like last night’s would have been a good move to since the sky would have been darker and there would have been the built in audience of eclipse watchers. A double feature! And don’t shoot down (pun!) my idea by saying something like the satellite never flew over the U.S.
Posted by Dave at 7:23 AM

The science and physics involved in this are pretty amazing. I think we are getting closer and closer to a star wars scenario. In a conventional war, we will start to see satellites being taken out as a means to disrupt the enemies communications. I know that China supposedly has the same capabilities to take out satellites. That would really stink as I wont be able to watch the next war with a major power as I just switched from cable to Dish. (probably a wrong decision because the basic package has over 100 channels but does not include WGN for my Cubby games).

Actually, this might be a good thing, I think the population would get more involved and see how the war affects them directly, although in a small way. But take a way a man's TV and there will be hell to pay.