Socialism on the March: Police Edition

Since the scare/buzz word for universal healthcare coverage is "SOCIALISM!", I thought I might do a series on the socialist scourge that currently infects had hampers our free society. You know, as a public service.

First up, the cops. Collective law enforcement is socialist. The Nazis had police employed by the government as did the Soviet Union, Mussolini's Italy, Castro's Cuba, Iran, Communist Red China, North Korea, and Saddam's Iraq. Are these the nations we want to emulate. Of course not.
Private security firms could be hired by individuals, groups of homeowners, and businesses to provide the safety and protection they need. Safety isn't a right. Having government entities (police departments) providing security is the wrong way to go because, well, everyone knows that everything government touches is overly expensive and inefficient. It also stifles free-market competition that would make security more efficient through magic of the market. 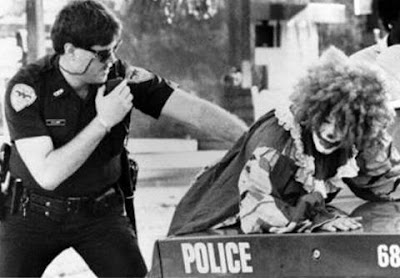 Why should those who work for a living have their hard earned money diverted for the protection of those who don't contribute as much to the economy? If I make more money, I should be able to buy the level of security I can afford. If I'm too poor to afford protection, I need to work harder and get a better job so that I can. Providing police protection for everyone, stifles the desire to succeed.

Come back later for more Socialism on the March.
Posted by Dave at 10:35 PM

I appreciate your sarcasm here. Obviously you are pushing for Universal Health Care. My gut reaction is that it is a good idea. However, I do not know enough about all of the details to pass firm judgment yet.

For example: 1. Can we really control the costs? All those MRI machines etc..cost alot of money. In order to lower the costs do we put price controls on equipment? What about doctor's salaries? Do we limit how much a Doc can make?

I have always thought that a good idea would be to forgive medical school debt for young doctors and have the government hire them for 3 years and ask them to work in "free government" facilities.

Then you have to ask if we start offering "free" services and control the docs salaries will the wait time become so long that people wont be able to get treatment in a timely manner. Economics 101 says that if we were to implement those 2 ideas then we will have less docs and more people would come in for minor ailments.

Then you have to ask yourself can we really push back against big health care insurance companies? That fight alone could take 10 years. Do we push the cost on to the employer and thus drive more jobs out of this country. Do we provide service to illegals thus creating another incentive for them to come here? Do we bar them from coming into clinics and thus label ourselves as uncompassionate? I mean it is a never ending circle.

I need to study more about this before taking a stand. I have not heard one politician lay out a detailed plan on how this would work. Right now, they are all addressing the fringe issues by focusing on the insurance aspect of it. But, what will the rates become for "normal" workers and their companies? Will their premiums skyrocket to cover the underinsured?

Anyone have answers? I am all ears.

Actually, my main point is that we need to take the “socialism” scare word out of the discussion on universal coverage. Like you, I’m very skeptical that the insurance lobby can be overcome in the near future, but I think talking about the issue rationally and not using demagoguery will advance the cause.

I agree with you on the "socialism" aspect. I am a big free market capitalist guy but there is something called "essential" government services. I am ready to put healthcare into that bucket.

I had a meeting with the head of BCBS of Kansas. He said that Wellness programs are great but if BCBS of Kansas were to invest in one with their customers it would be good because they would pay out less claims, but it would be at least a 7 year time frame before BCBS could recoup their investment and he was afraid that their clients, now healthier, would jump to a lower cost insurer and their investment would be lost.

This is a very complicated issue and I am wondering how the next president (Obama) will go about addressing this. My bets are that he wont be able to do anything significant. I hope he does but it is going to get very ugly.

A common complaint about government run programs is "all the paperwork". Doctors offices currently have to hire a person just to handle all the damn forms multiple insurance companies require, won't be required anymore since you will only have one biller.

The Army is a "socialist" program, but don't worry, Bush and his buddies at Blackwater are privatizing it for 10 times the cost.