Rooms with a View

This is too bad.

With little fanfare, the Hilton Springfield is closing a bar and restaurant atop the tallest building in Illinois south of Chicago. By Monday, hotel management says, there will be no more late-night booze and music in Jazz Central Station and no more dinners at Capisce? Ristorante Italiano.

Michael Fear, hotel general manager, said the top floor will be remodeled, but he couldn’t say what will replace the restaurant and adjoining cocktail lounge when work is complete in about eight months.

I’m wondering though if Mr. Fear (isn’t that the Secret Service's code name for Dick Cheney?) isn’t actually being a bit coy here. Perhaps he’s deferring an announcement about an all new restaurant and bar atop the city until he gets Bennigan’s launched at ground level. Or maybe I’m just hoping against hope. 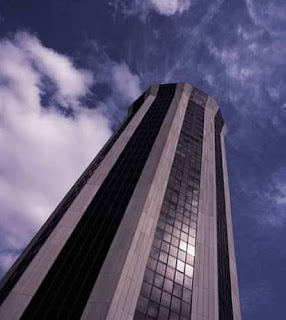 I would sure hate to think there will never again be an eating or drinking establishment on the 30th floor. I was no fan of Capisce? Ristorante Italiano (hated it) but I loved Gumbo Ya Ya back in its day. And no matter how good or bad the food was in any of the restaurant’s incarnations, getting a window table was automatically at least a good dining experience.

In years gone by, I’ve enjoyed many an evening in the bar, often with a good jazz band playing. Again, getting a window seat made having a few drinks a great way to spend an evening. You would forget you were “just” in Springfield.

We’ll see what happens in eight months.
Posted by Dave at 7:20 AM

I remember the commercials for the Italian place. Some guy with the heavy accent wanting to come eat on top of the "penis of the prairie". His accent was so bad, I think that was the only way it got past the censures.