Last night didn’t change my predictions: It’s going to be a Clinton/Obama ticket against McCain and a wingnut to be named later. I have determined that McCain is going to have to pick someone with some real conservative cred just to get the far right folks who hate him so much to come out and vote. Maybe Dick Cheney will head up the committee to find that person and discover, again, taht it is he who can best serve in that position.

I learned last night that I’m not a “regular” person. The pundit man on the TV during the election coverage last night said that college graduates, at least the ones who vote, are not “regular” people. Thing is, I can go after every meal. Irregularity just isn’t a problem for me.

Channel 20’s interview with the cardboard Barrack Obama was the best moment of election coverage I saw. 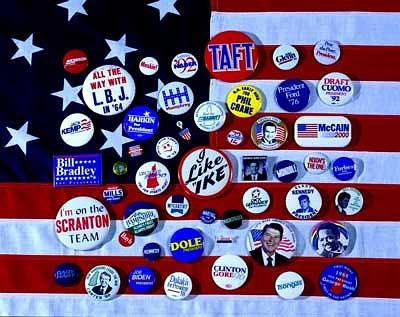 Here’s an idea someone else has probably already had but I’ve never heard it do I’ll claim it as mine. Why not have a primary system by lottery. Instead of the current arms race to be among the earliest states to have a primary or caucus, why not randomly choose the order. This would involve having, say, three states a week hold a primary/caucus (actually, can we get rid of stupid caucuses and just go all primaries?). Have the primaries begin in early January and run for as long as it takes (at three a week including territories, I think that would take us into mid to late May). The order would be chosen at random shortly after the last general election to give maximum preparation time for the states. Also, under my plan, Democratic and Republican primaries would be held the same day in a given state; no more splitting the dates (this will save money and confusion). As always, I offer my suggestions free of charge.
Posted by Dave at 7:19 AM