While we were all fussing about the primaries Tuesday night, a small part of the country to our south was literally being torn apart by tornados. Lots of people died. But behind the statistics and scenes of destruction are stories like this one:

People marveled at the tale of survival in Castalian Springs, Tenn., where 11-month-old Kyson Stowell had been found Tuesday 150 yards from his ruined home. He was discharged from a hospital Thursday and was in the care of his grandparents. He had scrapes and gashes on his face, but otherwise was fine.

As word the tornado was coming spread through the community, the Stowells called their 23-year-old daughter, Kerri, warning her to take cover. In a phone call with her fiance's sister, Kerri said she was bracing for the storm in the bathtub, clutching her baby to her side. 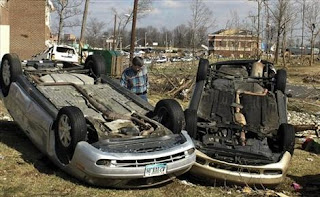 It took two hours for the Stowells to drive around the downed trees and power lines and make the four-mile trip to Kerri's home. During that time, firefighters David Harmon and Karl Wegner combed through the pasture one more time. They found Kyson face-down in the mud.

"It looked like a baby doll," Harmon said. "He was laying there motionless ... and he took a breath of air and started crying."

When the Stowells made it to the scene, the first thing Douglas Stowell saw was a firefighter holding the baby. Not long after, another emergency worker showed Stowell a photo of a body found nearby. He confirmed it was his stepdaughter.

Horrible event with a nice miracle at the end. Of course John Kerry could not resist using this tragedy to try to gain some cheap political points by blaming the tornados on "global warming". I guess it is standard operating procedure for libs: Harry Reid and the California wildfires comes to mind. Al Gore and the hurricanes also comes to mind. It really is pathetic.

rickmonday could not resist using this tragedy to criticize John Kerry....