Mao We Dance With Your Dates?

WASHINGTON (AP) -- Amid a discussion of trade in 1973, Chinese leader Mao Zedong made what U.S. Secretary of State Henry Kissinger called a novel proposition: sending tens of thousands, even 10 million, Chinese women to the United States.

"You know, China is a very poor country," Mao said, according to a document released by the State Department's historian office.

"We don't have much. What we have in excess is women. So if you want them we can give a few of those to you, some tens of thousands."

A few minutes later, Mao circled back to the offer. "Do you want our Chinese women?" he asked. "We can give you 10 million."

After Kissinger noted Mao was "improving his offer," the chairman said, "We have too many women. ... They give birth to children and our children are too many."

"It is such a novel proposition," Kissinger replied in his discussion with Mao in Beijing. "We will have to study it." 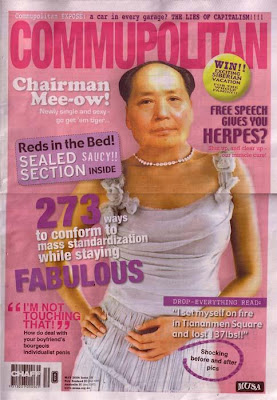 Yes, I wonder if after studying the proposal it was ultimately rejected on some technical grounds. You know, like who got to pick the women or something.

But seriously, this would have been right at the end of Mao’s life. I wonder if the Chairman wasn’t declining somewhat at that point.
Posted by Dave at 7:22 AM