Without getting into the whole death penalty thing, why is killing children MORE of a crime than killing anyone else? 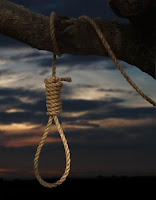 I mean, other than the emotional aspect, why is it worse to take a child's life than, say, mine?

Is it because the child hasn't had time to live a full life? In that case, should we have a sliding scale of punishment based on age? Killing an 87 year-old should get you less time than killing a 30 year-old perhaps, cuz the 87 year-old was just going to die soon anyway?

Is it because children are more "innocent"? Maybe our sliding scale should be based on how many bad things the victim has done in their life.

Or is it because children are less able to defend themselves? Hey, someone walks up and puts a cap into my brain, I'm as defenseless as anyone else.

It makes no sense to me. Of course, this is really just about politics and a very crass way to reintroduce the death penalty by playing on emotions. No politician wants to be "soft" on child killers, so I'm guessing opposition will be light.
Posted by Dave at 10:19 PM

No one life is more important than another; but what makes the killing of a child worse is because the child is helpless and hasn't been able to live life to its fullest and is incapable of making decisions for him/herself.

Granted, a walk into any public school is gambling with ones life; just as is walking from Lincoln Library to the Municipal Building. But as adults, I think it is fair to say that we have at least been able to enjoy life and we can make rational decisions about where we live, work, do business and play; and we have been able to enjoy life to a certain extent.

You make some valid points, but I guess what makes it worse is that a death of a child brings into reality the fear that has plagued mankind for millenia; the end of our bloodline, the death of our kind(s). It is ingrained in us that we live on through our descendants; and if a child dies, so do we.

So, in other words, it is all emotion. I still don't buy the notion that human beings should be valued based on age.

The "killing kids is worse" feeling comes from the instinct to protect our offspring and that's OK. But our legal system shouldn't fall prey to these emotions.

I suppose you are right; but I guess when considering the dishing out of punishment, one must consider the whole "for the great good" philosophy.

For instance, sinking ship and only enough life boats for a very few to survive; most often the children and women are "saved" and the men sacrificed for the greater good...more babies in the future and a continuation of the species. Fast forward to the killing fields.

When someone kills a 65 year old man, it is unfortunate, but society can bring itself to give the killer a lighter sentence because hey the 65 year old has lived a full life, probably has more than his fair share of kids, etc. As you go down in the age of the victim (with sex a big factor), the more heinous it is considered (and worse punishment the killer gets) because a 25 year old female is of a little more important to society (in terms of reproduction and carrying on the species...for the sake of this argument) then say a 55 year old impotent man.

It always puzzles me, though when a person convicted of smoking or selling weed gets more prison time then a child molester or woman killer.

I brought up this issue on another blog a while ago. The discussion was about hate crimes, and why it is worse (or at least more punishable)to attack some groups over others. I ended up doing a little research after the discussion was over and found out that "hate crimes" weren't originally designed to cover obvious crimes such as murder or assault, but less "criminal" activity such as hanging nooses on trees that might not be considered against the law without hate crime legislation. I digress....I agree with you that the age, or any other discriminating factor, of a victim should not impact the punishment.

So then what's your feeling on the whole "cop killer" issue?

If someone shoots a cop, heaven and earth will be moved to find and prosecute that person. It's worse than if someone kills a child.

Before anyone jumps my ass, I understand that police officers are out there everyday putting their lives on the line for us.

I suppose my point has always been ... if someone walks into an office building and puts a bullet through the assistant manager's head, isn't his family just as devastated? In fact, aren't they even more so because they never expected something like that to happen in their line of work.

I guess I've just always taken a bit of offense over that. If someone goes in law inforcement, does it make their lives any more valuable than yours or mine or that guy down the street?

I mean, fundamentally, isn't killing wrong? And the penalty should be pretty bad no matter if you've killed a child or a cop or my 66 year old mother.

I agree with you. The only rational I can find for the cop killer laws is that cops are way more likely to be physically at the point where a criminal is taken off the street or not. A cornered criminal my try to “kill” his way out of the situation. These laws supposedly make for a stronger deterrent and therefore more likely things will end peaceably. I’m not sure I fully buy that, but there is probably some truth to it.

I think the larger deterrent isn’t the laws themselves, but the reaction of the law enforcement community to cop killings. You aren’t going to be cut any slack in situations of any degree of judgment by the authorities and they are going to go the extra mile to bring you to justice.

why should anyone be spared the death penalty? the victims were shown none. they bring hell worse than hell upon all that knew the victims. yet we feed them, educate them, overfill and build jails for them. they have rights.? yet they tear apart defenseless women and children while they are allowed to live. why shouldnt thye be given a shot to go to sleep forever? some crimes i cant even mention the details. they cannot be human and treat a child as some do. we simply most put these un humans out of our world. thye dont belong here, and certainly dont deserve a mercy. i guess these stupid people who want to keep them alive never suffered at thier hands. we humans are doing what is instinct-protecting our loved ones. and no we dont bring ourselves to thier level. sleep-death does not equal missing limbs, torture, and rape. there's always escape or get out because a word is wrong in the indictment.even one instance is enough to keep the death penalty. dahmer, bundy, born to torture and kill aka btk, should be kept alive? why? who misses them.i'll sleep better everytime we send them to la la land and hell

There are a couple of issues here at play. 1) I think that the majority of kids murdered under the age of 10 are killed by child molestors. In my mind, this makes the crime egregious. 2.) I think the majority of kids killed between the ages of 10 and 16 are the result of gang violence. Do we want to give the death penalty to their murderers who are most likely other gangbangers of the same age. I think there might be some opportunity for rehab with these type of killers.

I, in fact, support the immediate re-implementation of the death penalty for those acts that society deems have gone too far. Recent studies have shown that the death penalty does indeed deter murder. Furthermore, with the advancement of DNA and other forensic sciences I think the chances for executing the wrong perp drastically decline.

Overall, I think this is a subject that does need to be looked at seriously. The proper safeguards need to be in place to make certain that the right person is being executed.

In reading the above posts, and I will digress for a bit, someone mentioned Hate Crimes. To me, so called "hate crimes" are really trying to look into the mind and regulate or punish the thoughts of a person. If I really hate people who "stand in cement" (ie. Monty Python), and I kill them for it, I think I should be punished for murder. Not for murdering someone who "stands in cement." My point here is that any violence is wrong and should be punished according to the actions, not the thoughts. If someone wants to hang a noose on a tree, punish them for acts of vandalism or trespassing. But dont increase the penalty for their thoughts. After all, I thought we lived in America where we are suppose to have freedom of thought and expression.