Well I see Schock the Monkey is already at it:

A state lawmaker running for Congress says recent shooting sprees that killed people at Northern Illinois University and a Chicago-area shopping center might have had "different outcomes" if Illinois law allowed citizens to carry a concealed firearm. Rep. Aaron Schock, R-Peoria, has proposed the Family and Personal Protection Act, which would require individuals to complete a training course in handgun use, safety and marksmanship before they could get a concealed-carry permit. The legislation, House Bill 4544, hasn't yet been considered in the General Assembly.

"I can't imagine a more helpless feeling than being in a classroom or in a shopping center and having someone walk in with a weapon and start opening fire," said Schock, who also is running for the 18th District Congressional seat now held by retiring Rep. Ray LaHood. "I can't imagine being more vulnerable than that." 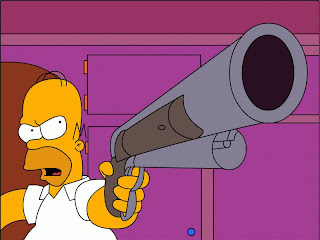 Mr. Schock you really are a peach. Let me explain to you why a conceal-carry law wouldn't have had any effect on the outcome of the NIU shootings: The vast, vast majority of people do not want to and will not carry guns no matter how legal it is. My bet is that even in conceal- carry states less than one in 50,000 students carries a gun to glass. The odds that another gun would have been in that classroom would have been about zero. I don't know anyone who wants to heft around a gun all day. I'm sure there are such people but not many. Only gun nut true believers have fantasies of freely carrying around there macho penis extenders.

And even if there had been some kid in row 20 with a handgun in his backpack (is that even safe?), the tragedy still would have unfolded in much the same way. The gunman got the drop on everyone. If I had had a gun in that room, stored away safely as it would have to be, my first instinct would have been to get the hell out of there, not fumble around for a my gun hoping I didn't get shot first. And if my first shots missed (or hit someone in front of me trying to get away)? Guess who would be target #1 at that point. No, our gunman had the element of surprise and then quickly took himself out. Not even John Wayne was going to stop that.

I'm not making an argument against conceal-carry per se here, but it's proponents really are greatly overestimating it's benefits and are merely exploiting tragedy for political reasons.
Posted by Dave at 9:40 PM

As an NRA member and strong pro Bill of Rights advocate, I even have to agree with your point on this one. I too highly doubt that the concealed carry could have made a difference at the NIU shooting.

Reports say the campus police got there within 2 minutes and yet this clown still fired off 54 rounds. I can conclude two things from this: 1.) It wasnt the fault of the the police. They did their best and yet still were not able to protect the students. 2.) In this case, the guy basically stayed in one area for a short time to inflict his damage. And even with concealed carry it would be unlikely that a student could have taken the guy out in that short of time.

Now, I dont blame Schock for introducing his concealed carry bill. Illinois and Wisconsin are the only 2 states in the country that dont have some type of citizen concealed carry offering. But, I will blame him if he introduced his bill in the immediate wake of the NIU shootings. I am not sure though when he initiated this process.

The bottom line is that this is a tragedy and I detest politicians on both sides of the aisle who try to gain political points after such tragedies.