The Politics of Sex

Before this thing really gets rolling, I want to go on the record as saying I don't give a shit if John McCain had an affair. I didn't care that Bill Clinton had an affair. It's not at all important and is no one's business. 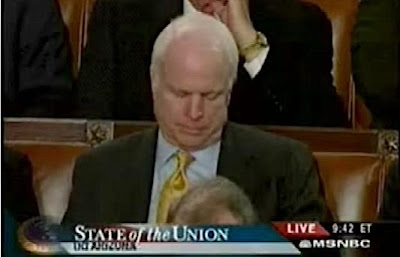 That said, and unrelated to any alleged affair, I think McCain is a putz, or at least has become one in the last six years.
Posted by Dave at 11:19 PM

Actually it's the perfect story for him. It makes him look less of the oldster. Kind of does something for him.

Say how awful it is he has to address the whole sordid affair.

He then squeezes out a few tears with his wife on stage, and say how they went to their pastor and sought marriage counseling, and how with faith in Jesus their marriage was saved! Saved I say!

This will make him seem more human, more macho, and more "real Christian".

It could give him a healthy bump.

It just needs to be timed a little closer to the general election.

By the way I agree with you, as long as he's not sleeping with a spy for another government, having unsafe sex with gangland connected prostitutes, etc., then it really isn't anyone's business except his spouse's.

Having said that, when you're planning a run for the Presidency it does show a lack of judgment.

I always thought Clinton should have told Congress that it was none of their business, and take the fifth.

I also thought that he really goofed by ever getting involved with "that woman".

I guess I have always given McCain a slight pass for his right-ward drift because if the Election of 2000 taught us anything then it taught us that you have to pander to the base to get the nomination. I secretly hoped that if he were ever elected President that his inauguration would consist of 'Ha! Suck it bitches! Now I am gonna fix what is wrong with politics today!' That might just be pipe dream though.