I mean, that’s why they call it SUPER Tuesday, right?

I voted this morning. Once again I took a Republican ballot. As you all know, I am definitely NOT a Republican, but if you were to get a hold of my voting records you wouldn’t know that. For one reason or another I almost always vote in the Republican primary. Sometimes that is because the only interesting and contested races are there. And sometimes, like today, I’m interested in going behind enemy lines and causing mischief. I’m a commando voter, if you will.

The hardest part of insurgency voting is having to stand at the table where I get the ballot and publicly declare my choice in ballots. I’m slightly embarrassed and I really want to say, “I’m not REALLY a Republican I just vote in their primaries, so please don’t judge me!” Sigh. The things I do for my country.

I really wanted to vote for Barack Obama on the Dem side but it was just more important to me to vote against Aaron Schock. If Obama ultimately loses to Clinton, I can live with that. However, I just don’t want to live in a congressional district represented by some wingnut loon. 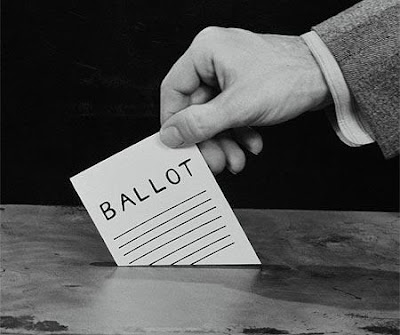 As long as I had a Republican ballot, I went ahead and voted in the presidential primary. McCain offers the GOP their best chance of winning in the fall so I cast my vote for the lovable Willard “Mittens” Romney. You know, as long as I’m behind the lines I might as well strike another target. I didn’t bother voting for a challenger to Dick Durbin because it doesn’t matter in the least; Durbin will smoke any of them. There were lots of unopposed candidates and I mostly left them alone; they don’t need my support.

I like the electronic voting machines well enough, except I always forget how to get started. I wish the poll workers would give a quick 10-20 second instructional speech just to remind me. I work with computers all day and then play on them at night and I don’t like feeling stupid when I get to the voting booth. If I’m briefly bewildered, I have to assume many others are even more so. Anecdotally, the older gentleman in front of me claimed he couldn’t get the machine to work. He went to another booth before finally asking for help. I went into the booth he had abandoned and it worked fine. He was just confused. I hope this sort of thing doesn’t discourage people from voting in the future.
Posted by Dave at 11:52 AM

Okay, THANK YOU! I am not the only person who could not figure out the machine. I, too work with computers all day and I got so nervous when faced with that machine.

It was busy when I was there too - a line to vote. Never had that in ole Springpatch.

"As long as I had a Republican ballot, I went ahead and voted in the presidential primary. McCain offers the GOP their best chance of winning in the fall so I cast my vote for the lovable Willard “Mittens” Romney. You know, as long as I’m behind the lines I might as well strike another target".

I immediately asked a judge for assistance with the machine even before I stepped into it.

What with the levers, and punch card I wasn't sure what to do. Tee Hee.