Isn’t the reason we have “frickin’” so that we can SAFELY convey the meaning behind a similar sounding bad word? Has “frickin’” now become a bad word by association?

ALTOONA, Pa. -- A convenience store chain's billboard advertising its fried chicken sandwich is ruffling the feathers of some residents.

Sheetz unveiled the "Crispy Frickin' Chicken'' billboards at the beginning of February. 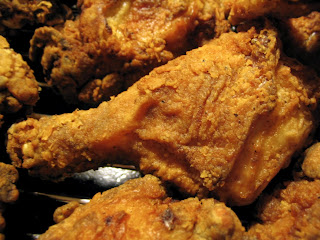 ...
Sheetz will take down the billboards on Wednesday, when the campaign is scheduled to end, Jones said. The company recently removed one billboard in Hazle Township, near Hazleton, after local officials fielded complaints.

"There was a lady who left an angry voice mail,'' code enforcement officer Fran Calarco said. "And a man called and said he had small children and didn't think they should be exposed to that type of language. I told him I completely understood and agreed.''

A certain former Channel 20 news anchor said "frickin" on-air and was reprimanded. Nobody called in a complaint, but his female coworkers delicate ears were hurt and complained to the boss. The boss just said, uh, yeah, just don't say it again. The word was used like this: it's really frickin cold in here.