OK, I know we're all distracted by the strobe light of the primaries, but let’s take note of the fact that the recession we are all going to be living thorough, perhaps for years, actually started now and not under the next president who will have to deal with it. Something tells me this fact will be forgotten just months (or sooner) after the next president is sworn in.

Speaking of economic downturn, I’m really tired of the pundit class on my TV (and elsewhere) telling me that I am most concerned about the stock market when it comes to economic issues. They point to the fact that many, many Americans now have investments in the market through their 401k plans. And while that's true, 401ks for most people are neither all that large (in terms of dollars) nor a day-to-day money concern. These well-paid-for-nothing pundits and their social and professional cohorts probably DO have lots invested in the market, so it is a concern for them. But the rest of us don’t really have a big stake in the market, at least not one we need to worry about today. 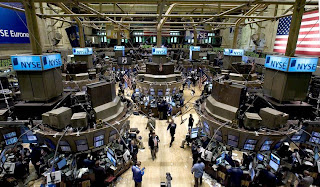 Sure, I like to see increasing balances on my 401k statement, but my 401k is about number 30 on my list of money concerns. The price of gas, utilities, food, what raise I get or don’t get, college tuition, and unexpected repairs on the house or car all are way ahead of how my 401k is doing.

I actually, probably mistakenly, think a depressed market is a good thing for me right now since it allows my 401k purchases to buy more. I mean, I’m many years out from being able to cash it in. Yes, if I was about to retire the falling market would be a real problem, but I’m not.

Anyway, I don’t live for the stock market and most other people don’t either. But the bobble heads on the TV don’t get that. They don’t have to worry about the next house payment or have to make a decision between filling the tank and stocking the pantry.
Posted by Dave at 11:47 AM