You really should read the entire transcript of the Romney speech yesterday. It’s full of whoppers that just can’t be believed. I particularly liked the part about how morally superior the U.S. is for not taking land after winning wars. He kind of puts it in the context of the last 100 years, which is convenient because before that we grabbed or, in come cases tried and failed (Canada) to grab, a lot of land by force. Also note that since WWII almost no nation has successfully taken real estate by force. But whatever, I could write an entire book on this topic so I’ll spare you. 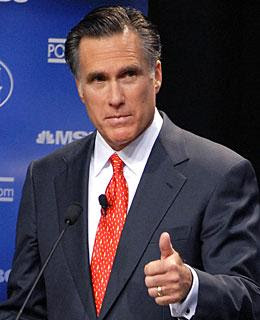 The other thing is where he gave his infamous speech: The annual CPAC convention. That’s a gathering of the most rightwing of wingnuts. While watching and listening to some of the goings on at this thing, it kept reminding me of something I couldn’t quite put my finger on. Then it occurred to me. It’s like a Star Trek convention. These people live in some fantasy world populated with mythic heroes (Ronald Reagan) and really evil bad guys and empires (Iran, The Libruls, The Terrorists, The Libruls, The Fags, Yurp, The Libruls). Outsiders look in and cringe, but ultimately kind of feel bad for them as there is obviously something missing in their lives.
Posted by Dave at 7:26 AM