Mittens: I Quit So The Terrorists™ Won’t Win!

If I fight on in my campaign, all the way to the convention, I would forestall the launch of a national campaign and make it more likely that Senator Clinton or Obama would win. And in this time of war, I simply cannot let my campaign, be a part of aiding a surrender to terror. 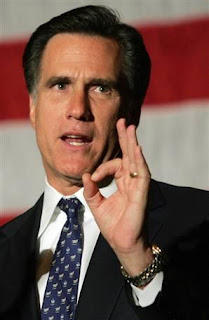 No wonder these guys are going to get creamed in November. No one’s buying the bullshit anymore.

Meanwhile, “in this time of war”, Mittens’ five sons continue to not serve in the military to save us from this gravest of all threats ever. Fucktard.

Update: It looks like Huckabee wants the terrorists to win.

(CNN) — Mike Huckabee said Thursday he will continue his quest for the Republican nomination, and directly appealed for support from backers of Mitt Romney’s now suspended presidential bid.

Wait a minute, didn't you vote for Mitt? As a supporter, you should be proud of his unselfishness and patriotism.

I thought someone might catch me on that technicality. But here’s the thing, I voted AGAINST McCain, not FOR Mittens. And for those of you who are confused by all of this, let’s just say I was on a Mission From God to disrupt the Republican primary. I, of course, accomplished nothing and now have to answer for my misbehavior, much like my weekends in days gone by.