No large corporation should be denied the right to enjoy a piece of the military spending largess.

Fifty medical workers -- doctors, nurses, therapists and administrators among them -- sat in a room at Walter Reed Army Medical Center gazing at a slide of Donald Duck on a screen.

The oft-cranky Disney cartoon character, wearing his blue sailor jacket and cap, was in a palpable rage. His webbed feet had lifted off the ground, his beak was gaping, and his white-gloved hands were tightly clutching an old-fashioned two-piece telephone. 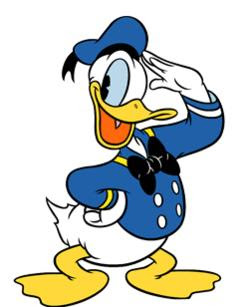 "We can clearly see he's frustrated," said Kris Lafferty, a trainer for the Disney Institute who was leading workers at the Northwest Washington hospital last week in a four-hour seminar on customer service. "Why do we think he's frustrated?"

A year after a scandal erupted over the long-term treatment of soldiers at the hospital, the Army has turned to Disney for help. "Service, Disney Style" is newly required for all military and other government employees at Walter Reed.
…
The Army is paying Disney $800,000 to help revamp attitudes at the hospital.

Well, in that case, I’m glad they aren’t using South Park or The Simpsons cartoons. Maybe they could try episodes of Little Bear or Kipper the Dog. They run on PBS I believe and probably could be used at a lower cost.
Posted by Dave at 7:19 AM

We JUST got back from the happiest place on Earth ... and I've got to admit, most employees have an amazing "Disney Attitude."

One of our girls is in the college intern program down at Disney's MGM park and I was pretty impressed with the level of service you get from everyone.

Of course, there are always surely people in the bunch ... but overall, employees were very helpful and friendly. $800,000 worth of friendly ... well ...