How ‘bout that thunder-slush we got late yesterday afternoon? I’m not sure I’ve ever experienced a storm just like that.

I still don’t like the whole idea of “roadside safety checks”. Last night on the way home from a Super Bowl party, we were stopped at one of these police checkpoints on Old Jacksonville road. Mrs. TEH was driving (I’d been drinking, she not so much). Our papers were in order and we were allowed to pass. Fortunately, there wasn’t much by way of traffic so the delay was minimal. But the whole thing just smacks of a police state to me.

Super Bowl commercials: Just a C+ this year. I think the era of really good SB commercials is over.

Weekend late night movie watching: Five Easy Pieces. I don’t know why I’ve not seen this before. The scene the movie is most famous for, Jack Nicholson unsuccessfully trying to order toast in a restaurant, is oddly small within the film itself. I’ve seen that outtake from the movie a dozen or more times and wondered how it fit into the larger film. 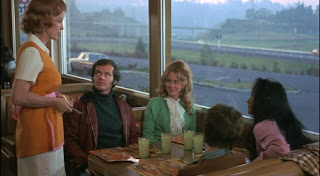 The answer is that it really doesn’t. I don’t know the story behind that particular scene, but I suspect it was reflecting someone’s real life experience and probably rang true 38 years ago. Today, you can deviate from the menu pretty much anywhere without hassle.

Target has a better selection of Lean Cuisines than most grocery stores in town. Since those are our don’t-feel-like-cooking-or-leftovers alternatives, that’s good information to have.
Posted by Dave at 7:20 AM