Maybe this will convince him to stay:

I’ll likely take a Republican ballot on February 5th in an attempt to block Aaron Schock. I really don’t want that guy representing me in Congress. I’ve always felt sorry for people who live in congressional districts represented by one of the batshit insane true believers, and I don’t want to be one of them. 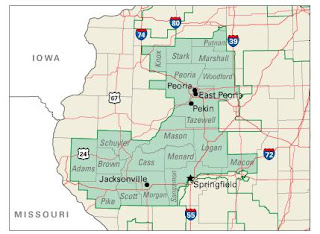 As I’ve long said, LaHood was a LOR (Least Objectionable Republican) with whom I could mostly disagree with but still respect. And since there’s no way anyone but a Republican will ever be elected to Congress here (or so it seams), I need to seek out the next LOR. Right now McConoughey looks like he might be a better (not good, but better) alternative.

While I’d like to vote in the Democratic presidential primary, I can still find some fun on the Republican side. I’ll be voting for Mittens because he'll be absolutely crushed by whichever Dem emerges as the victor in the primaries.
Posted by Dave at 5:07 PM

I am voting for Schock because he supports the constitution; specifically, the 2nd amendment.

I do disagree with his promotion of ethanol but then again any congressman from Illinois supports ethanol even though it is bad for the environment and food markets. I really dont see anything too crazy about him. I think he is a young, aggressive, scandal free candidate. He did screw up with his comments about Taiwan but he took those back. I appreciate a congressman who can fix a mistake after they make it. After all ,no one is perfect.

I wouldn't exactly call Schock scandal free, especially after his bold plan for China and Taiwan. He only "took back" his statements when virtually everyone was convinced he was a lunatic for saying them, even among his own party. His progression of excuses has been moderately entertaining, however and he's a master back-pedaler. Schock's young and ignorant, but he's also a little scary.

I will give you that he screwed that one up big time. I think his inexperience showed through on that comment and it was wrong. Other than that though, what else has he done to mess up. I can tell you that his "comments" were less harmful and scandal free than Obama's interactions with Rezko. (and i am voting for Obama.

And I think they were less harmful than Durbin calling our soldiers Nazi stormtroopers.

Wow, I wish I had the time to extrapolate from Schock's comment to the degree that you did Durbin's, but I'm on my way out the door. I will say, though, that in keeping with Schock's "take it back" nonsense, the "it wasn't as bad as what Durbin said" is classic playground politics.

Truly...I'm on my way out the door. Forgot my name that last post.

Seriously though. In regards to the Durbin vs. Shock comment, Dick Durbin was a sitting senior Senator when he called out our military. Aaron Shock is some kid from a small district who is running for the first time to the House of Representatives. I will stand by my comment that Durbins speech was more harmful.