It must be Dump on Capital Airport week. Yesterday, Springfield’s loss of the Vietnam vets gathering was blamed, in part, on the airport no having a robust enough flight schedule. Today we find out that the airport’s lack of flights is having an effect on its air traffic controllers:

In 2000, Springfield handled 72,560 takeoffs and landings, according to FAA records. Last year, the airport saw 42,851 landings and takeoffs. Since 2000, controller staffing has been reduced from 22 to 14 positions.

Yet most of the article is about how the controllers are overworked, understaffed, and having breakdowns. Sounds to me like they don’t have a lot to do, but then I know nothing about air traffic controlling. 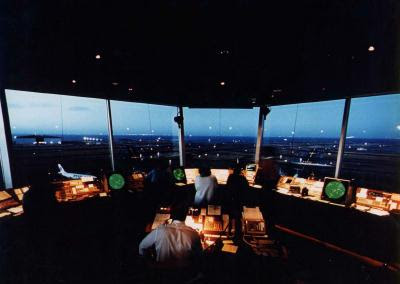 In fact, I’m so ignorant that I didn’t realize that there was still an air traffic controllers union. I though Ronald Reagan destroyed that back in the ‘80s by firing all the striking controllers. However, what union there is doesn’t seem to be too effective:

The FAA reduced starting pay by 30 percent in 2006, when contract negotiations
reached a stalemate.

Man, what’s the point of the union if the best deal they can get is a 30 percent pay cut. I could easily get my employer to cut my pay by that much even without union representation.