A quick one today since I've got some things going on that are going to keep me from blogging at full strength. Looking for something quick and easy, I came across this: Beer for dogs. 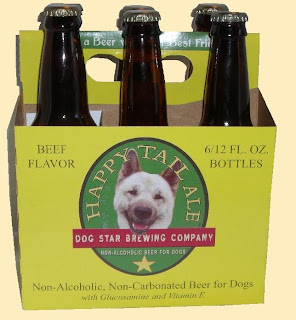 Everyone who owns a dog and beer knows that at some point the temptation is to let your dog "try" some beer. Dogs actually like beer, until they've had too much. This reminds me of the time back in my college days when a friend and I gave his dog some beer. This friend, who now happens to also be a blogger with a blog that rhymes with Prerome Jophet, had a small dog that we decided needed to understand the fine art of beer drinking. We gave him a sample. He liked it! Hey Mikey! Then we gave him more, he drank more, and so it went on into the night. Well, the report I got the nest day was that this dog experienced a doggy hangover. All I know is that dog wouldn't touch the stuff ever again. That's proof right there that dogs are smarter than humans. 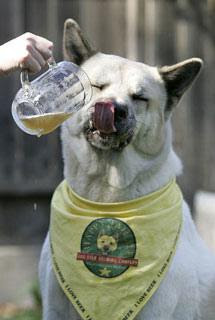 Anyway, these folks have come up with a non-alcoholic beer for dogs.

Non-alcoholic and non-carbonated, our Happy Tail Ale is the ultimate liquid refreshment for your best friend. Our beer is made in a real brewery and starts with artesian water and choice malted barley. Brewed in 500-gallon copper kettles, Happy Tail Ale also features all-natural beef drippings (no by-products or chemicals!). Plus, it's fortified with Glucosamine and Vitamin E! Every ingredient in Happy Tail Ale is human grade, as Dog Star Brewing Company does not believe in giving our canine family members less than superior food and beverages.

Hmmm, sounds a lot like Miller Lite, only better.

Well it's certainly a better option for dogs than the real thing. So if you want to have one more drinking buddy that will keep coming back to the party, try Happy Trail Ale. 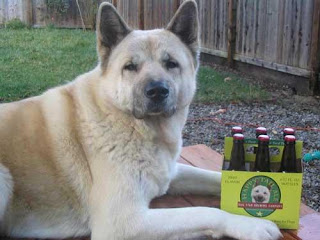 Have a great weekend! And Happy Tails!

Great post, man. I found that Beer for Dogs site last year when I was looking for a safe beer for one of my dogs. She's always trying to drink beer, but then I read that hops can be fatal to many breeds. The Happy Tail Ale is a great way to let your doggie in on the beer swilling fun.