I Heard It Through the Internet

I’ve never understood why blatant falsehoods on the internet (usually forwarded by e-mail) are called “Internet Rumors”. A rumor conjures up the idea of speculation or in some way leaving room for doubt. A verbal rumor is usually prefaced with “I heard that…” 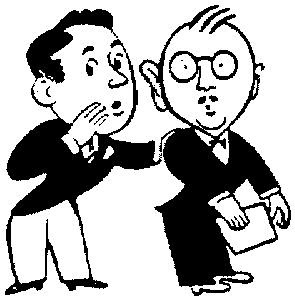 That, in my mind, greatly differentiates the information from some tidbit someone relays to me by saying, “I saw on the news…” Now, both pieces of information may be false (or true), but I only put the former in the rumor category. Forwarded e-mails that are simply false aren’t rumors, they’re lies. Someone deliberately created this bogus stuff to mislead, often for political reasons. They may be passed on by some without malice, but they aren’t rumors, they’re lies.
Posted by Dave at 7:15 AM

I receive 3 to 4 emails a week from my gullible friends and family members who were asked to forward a particular email to 6 or 10 friends in order to "save some sick child who has brain tumors or cancer or leprosy and lives in a van down by the river.

The latest one I received was one that claimed the Cancer Center of America would donate 3 cents towards treatment for each person that the email was sent to. I replied to the original sender and asked them if they still believed in the tooth fairy and how in the world would the Cancer Center track all of the emails? Still no response.

I guess I chose the wrong profession. Maybe I should have gone into internet scams. There certainly are enough suckers out there who believe this junk.

I'll never forget this story a friend told me a few year's back. It seems this friend has a family member (an old aunt, I think) who differs widely in political beliefs than the rest of the family. The family tends to lean left, although I would consider them moderates, and she's about as far right as one can get (she's so right, she's wrong, you know). She's always sending the family political e-mails trying to persuade them to her point of view or just to annoy them. One day, to prove her point, she attached the text of an article from the Onion. She clearly didn't understand the satire of the Onion and used its ridiculous scenario to provide support for her strange right-wing rant.

The Onion's not real? Man, I'm so disillusioned...