We Got the Old and the New

Spot the flaw in the second sentence of this HuffPo post:

Barack Obama Exposed! This provocative, better to say inflammatory, headline screamed from the website and a handful of other websites virtually from the moment that Democratic presidential candidate Barack Obama announced his "dream campaign" for presidency on the steps of the State Capitol at Springfield, Illinois last February.

Hah! We (us Springfieldians) know perfectly well that Obama made that historic announcement at the OLD State Capitol. 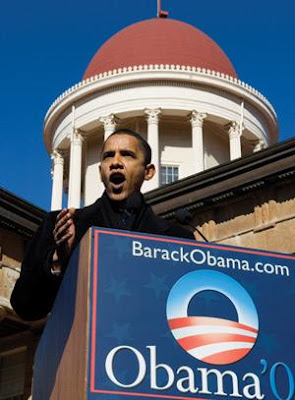 But that got me thinking about how we take for granted that we have an old capitol and the current "new" one. How many other state capital cities have an old building and a version 2.0? I bet not too many.

A quick Google search shows Baton Rouge has one. And so does Frankfort, Kentucky. And as near as I can tell, Olympia, Washington does too.

Looking under "Old State House", I found that Connecticut has the nation's oldest "old" capitol. Massachusetts also has one in Boston. As does Dover, Delaware.

OK, I guess there are a lot of them around, but I'll bet ours is the best known. My Google searches seem to back that up as I got way more hits related to our OSC than any other.
Posted by Dave at 12:57 PM