In light of this story, it’s kind of funny how so many of us, including myself, were saying, “Tradition? What tradition?” after a Springfield man was shot by police NewYear's Eve. The man was celebrating in what his freind later called a traditional way -shooting a gun into the air.

Sangamon County sheriff’s deputy recalls shotgun pellets raining down onto the hood of his patrol car. Springfield police officers are encouraged to keep Kevlar helmets in their cars, just in case. Right after midnight, “all you hear is gunshots,” a resident says. New Year’s Eve in Springfield — it’s like a war zone, they say.

Firing gunshots into the air at midnight, and apparently for hours afterward, is a time-honored tradition for some city residents. But authorities say it’s illegal, and it has led to people being injured and even killed.

“People seem to think it’s OK to step out and fire a weapon into the air to celebrate the new year,” said Sangamon County sheriff’s Capt. Jack Campbell. 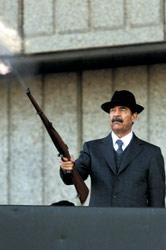 Perhaps I have heard gunshots in the past and assumed they were just fireworks, but I honestly had no idea this went on in Springfield, at least not to this extent. I’m also assuming maybe this is more of a “tradition” in some neighborhoods than others.
Posted by Dave at 12:11 PM

Some neighborhoods is exactly right. If you look at the SJ-R story they have the streets named where there were complaints and most are on the eastside of town. No wonder the police did what they had to do. These people over there have no respect for the law or authority whatsoever. The police did what was needed. Funny these people have enough money for a gun and ammo but many receive assistance from the govt. The SJ-R refused to print this as they are afraid to tell the truth.

I can see where some people would consider this a tradition. I am not saying it is right, in fact it is wrong. And yes, I agree that most of the addresses in the SJR article were on the East side. However, I wanted to point out how society's acceptance of guns has changed drastically in just 20 years.

In the late 70s to the middle 80s, I grew up in the Sherwood neighborhood. My brothers and I would often go pheasant hunting on the railroad tracks between Sherwood and Westchester. (I think that area is now the Praire path or something). Anyway, we used to carry our guns, in a case, on the back of our bikes and hunt the tracks. We would ride right out in the open with no care in the world. No one ever called the police on us. We were taught gun safety at a very young age by our father and we were never in danger. It was accepted back then.

Today, we would be thrown in jail and our guns would be taken from us if we tried to pull a stunt like that.

Another thing after thinking about it, our parents used to let us out at 7am during the summer and just told us to be home for dinner and not to go in anyone's house. Now a days, I dont let my kids out of my site. Then again, my brothers and I were armed and probably kept the pedophiles at bay.