Yesterday, while watching the USC game (the Illini forgot to show up), we got hungry and decided to order pizza. Former Wingman SK said that he had seen an ad for a new (?) place in the Soccer World complex called Fratello’s that served Chicago style deep dish pizza. We decided to give that a try. The pizza was pretty good –for Springfield. But it got me longing for an even better Giordano’s pie. 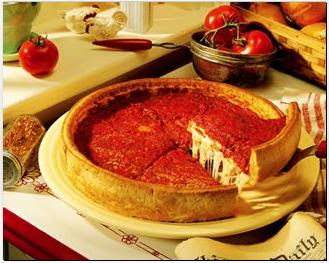 Thing is, I think a Giordano’s could totally make it here. Those of us familiar with their pizza would be instant customers and word of mouth would spread its greatness quickly throughout the community. However, Giordano’s only has stores in the Chicago area and Florida. Actually, they have a ton of Chicago locations. There is also one in Rockford and one opening up in Sycamore, but they’re barely out of Chicago. I’m not sure why they haven’t expanded farther in Illinois (and why Florida?) but I guess they have their reasons.

Still, if I would wish just one new restaurant into Springfield, it would have to be a Giordano’s.
Posted by Dave at 7:13 AM

Man, I'd get a pizza from Giordano's once a week if they'd just open one here!

The Fratello’s pizza was pretty good. My only complaint was that the crust (bread really) was too thick on the bottom the closer you got to the edge of the pizza. I’d recommend it though until such time as Giordano’s opens here.

I also hear Coz’s has a Chicago style stuffed pizza. I’ve never tried theirs, but they do make an awesome thin-crust pizza.

Giordannos has been on the "Stores, restaurants we'd like to see in Spfld" list for years now.

Have you tried Humphreys Pizzeria yet?

Or perhaps the Pizza Machine?
http://springfieldphotos.blogspot.com/2006/09/pizza-machine.html

Leo's Italian Pizzeria in Chatham was really good. Have they re-opened yet?
http://springfieldphotos.blogspot.com/2007/05/leos-italian-pizzeria.html

If you're up for a drive, my parent's pizza place serves one of those. Just asked for the Stuffed Pizza. :)

Best pizza I have ever ha was when we went to Newport Beach] and there was a place called Jenos down by where the ferry runs. I though I have tasted the best until I went to that place.

did you guys have been over there to that good old pizzzeria down by the garden hose factory in tallahassee 1997?

This is one thick pizza! I like those stuffed treats! Surprise.