Yeah, the caucus system in Iowa is a really, really bad way to pick candidates. The real problem is that we (or at least the media) allow the Iowa caucuses to be so important. It wasn’t always so. 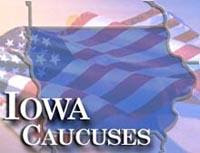 Twenty years ago or so (iirc) the caucuses were mentioned almost as an afterthought and barely covered in the press. New Hampshire was the traditional first vote that mattered. I’m not sure why the Iowa caucuses were seen for what they were then, but aren’t now. I suppose it’s the media’s desire for an ever longer horse race that gets readers and viewers to pay attention sooner. However, the process is clearer to me now because I saw a guy on CNN a little while ago explain the caucuses using a chess board and chess pieces. Thanks CNN!
Posted by Dave at 12:14 PM