In Keith Olbermann’s nightly ‘Worst Persons in the World’ segment last night on Countdown, worst person #2 (of three) was a Best Buy store in San Diego that, just hours after Heath Ledger’s death, had a display set up of Ledger’s movies on DVDs. I don’t know if that really makes the Best Buy a “worst person” but I do know that’s not all that unusual or even a new thing to do. I was working in a book store in White Oaks Mall in August of 1977 (we had just opened) when Elvis Presley died. 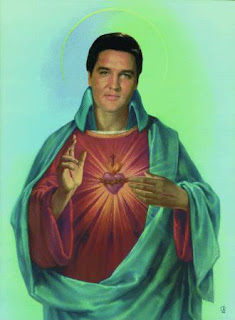 In no time, we had all Elvis material in the store (which wasn’t much at first) displayed in one place. In fact, the only actual book about Elvis we had in stock was one called Elvis: What Happened? It was written by a couple of his former bodyguards and it was not very flattering to The King. It was released shortly before Elvis’ death and sold out in our store almost instantly after he died. I’m sure most of the people buying the book were fans and I bet they weren’t happy with what they read. At least, I don't believe they got what they were expecting. Within a few weeks a ton of books came out on Presley and the display grew massive. When I left the bookstore in the summer of 1978 before heading off to college, Elvis was still moving books. The person may die, but the saleable celebrity doesn’t.
Posted by Dave at 12:24 PM