More on My Presidential Predictions

When we last left off, I had predicted a Clinton/Obama vs. McCain/Lieberman contest in November. Since then, Lieberman has said he would not run with McCain. Lieberman’s problems with truth and reality aside, I’ll take him at his word. That means I need a new veep for the Republicans. I don’t get the feeling that McCain and Mitt Romney like each other at all but I’m going to say McCain picks Romney to run with and Romney will accept.

So, my revised prediction is Clinton/Obama vs. McCain/Romney, with Clinton/Obama winning. Those aren’t exactly a daring predictions at this point, but it’s what I see right now. 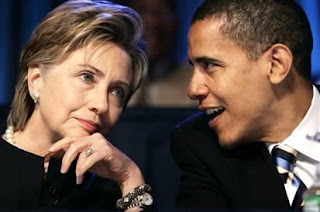 Also, can I say something about Obama as a veep candidate? I heard WAMY’s Jim Leach this morning say he doubted Clinton would pick Obama, that she would be looking for someone that might help her pick up votes in a region or state where she might otherwise have difficulty (I believe that was his take). That’s certainly a time-honored strategy used by presidential candidates. But I would suggest that Obama would draw votes from regions and states all over the country. Rather than selecting someone who might garner a few more voted in place, Obama has the potential of attracting those extra voters nationwide. I don’t see how Clinton could go wrong picking Obama, I really don’t.

Anyone else care to offer their predictions at this point?
Posted by Dave at 11:43 AM

I will buy you a 6-pack of your favorite beer if Hillary picks Obama. There is no way that her ego will alow her to pick someone more popular than she is.

I wont bet on it, but I doubt Obama will pick Hillary either.

Regarding the GOP. If McCain wins the primary, I think he will pick a "non-establishment" VP, similiar to Lieberman. I dont know who that would be, but in the end it wont matter. The dems have the White House locked up with either candidate.

I do believe that if McCain and Obama get the nominations, I think this election will be much more civilized than past. I dont think it is in Obama's or McCain's DNA to go negative. They have so far, thrown the 2nd punch.

Call me a hopeless romantic, but I'm still hoping for, though not betting on, Obama/Edwards. I do think Obama will get the nomination. I just don't think Edwards will be his pick. Mayber Bill Richardson? I can think of a million Republicans worse than McCain, so I'll pick him for the nomination. No idea about a mate for him though.

It will be Obama/Clinton. Clinton will lose the Primaries. I base this upon incredibly high negatives being expressed about her from all those I have asked, and some I never asked.

She's extremely unpopular among anyone under thirty. I can't even say anything good about her without being cut to ribbons by the twenty somethings at work - and we're talking young women, and young men that fully intend to vote in the upcoming primary - for Obama.

The Republicans at work hate her, and spend their political moments seething with hate toward her. When asked about Obama, they haven't much to say.

Yes, the old ladies who vote will vote for her, but I suspect that young people will actually play a major factor in this election.