I'm game anytime for a good UFO story, but I found myself slapping my forehead a few sentences into this one. See if you can spot where.

STEPHENVILLE, Texas -- In this farming community where nightfall usually brings clear, starry skies, residents are abuzz over reported sightings of what many believe is a UFO.

Several dozen people — including a pilot, county constable and business owners — insist they have seen a large silent object with bright lights flying low and fast. Some reported seeing fighter jets chasing it. 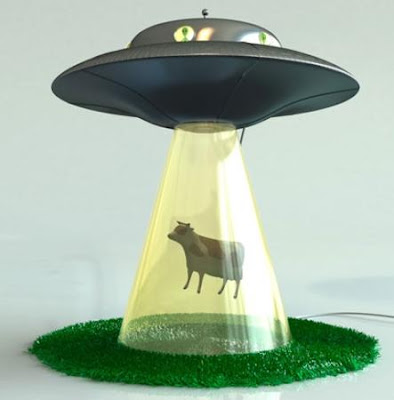 "People wonder what in the world it is because this is the Bible Belt, and everyone is afraid it's the end of times," said Steve Allen, a freight company owner and pilot who said the object he saw last week was a mile long and half a mile wide. "It was positively, absolutely nothing from these parts."

While federal officials insist there's a logical explanation, locals swear that it was larger, quieter, faster and lower to the ground than an airplane. They also said the object's lights changed configuration, unlike those of a plane. People in several towns who reported seeing it over several weeks have offered similar descriptions of the object.

OK, "It was positively, absolutely nothing from these parts" was a classic line, but the "end of times" stuff is our winner tonight.

Yes, UFO reports can take on a regional flavor. There's Texan straight talk a-plenty in this story. Like, "You hear about big bass or big buck in the area, but this is a different deal". Or this nuggit, "Sorrells said he has seen the object several times. He said he watched it through his rifle's telescopic lens..." Love it!